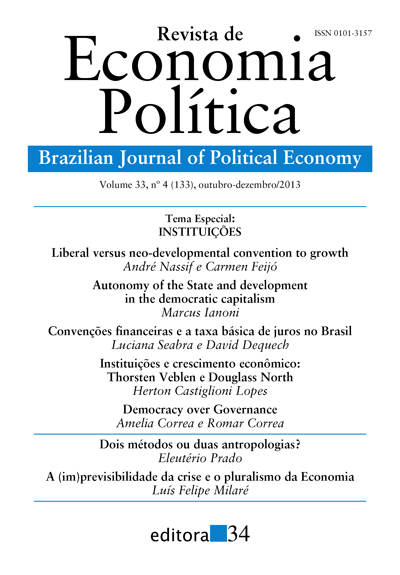 The main goal of our paper is to provide analytical arguments to explain why Brazil has not been able to restore its long-term capacity for economic growth, especially compared with its economy in the 1950-1979 period (7.3 per cent per year on average) or even with a number of emerging economies in the 1980-2010 period (6.7 per cent per year on average, against 2.3 per cent per year on average in Brazil in the same period). We build our idea of convention to growth based on the Keynesian concept of convention. For our purposes, this concept could be briefly summarized as the way in which the set of public and private economic decisions related to different objectives, such as how much to produce and invest, how much to charge for products and services, how to finance public and private debt, how to finance research and development, and so on, are indefinitely – or at least until there is no change – carried out by the political, economic and social institutions. This analytical reference can be connected to the Neo-Schumpeterian National Innovation System (NIS) concept, which emphasizes not only institutions associated with science and technology per se, but also the complex interaction among them and other institutions. In this paper we identify two conventions to long-term growth in the last three decades in Brazil: the liberal and the neo-developmental. We show that the poor performance in the Brazilian economy in terms of real GDP growth from the 1980s on can be explained by a weak coordination between short-term macroeconomic policies and long-term industrial and technological policies. This weak coordination, in turn, can be associated with the prevalence of the liberal convention from the 1990s on, which has emphasized price stabilization to the detriment of a neo-developmental strategy whose primary goal is to sustain higher rates of growth and full employment in Brazil.

State autonomy and development in democratic capitalism. The paper argues that if the state, as an expression and part of a pact of domination, operates as a corporate actor with relative autonomy, vision and capacity to promote the development, it is a key institution in the economic transformation. Supported in the neo-Marxism, exposes the limits of institutionalist approach of autonomy from the state to explain its origin, but does not rule out this approach. Maintains that the class-balance theory of the state may explain its relative autonomy and at the same time aid in understanding the historical experiences of social-developmental state action, particularly in the social democratic regimes and in Latin America current.

The aim of this work is to analyse the role of institutions in the economical growing. It searches for propose two theoretical models that explain the development, one is according to Thorstein Veblen and the other one is based on Douglass North. Thus, it summarises and compares the effects of the institutions growing and at the same time emphasizes the deviations and approximation on both theoretical chain. Beside the differences still exist, there is a research agenda that is approaching. In both theoretical models there are important concepts to analyse the effects of the institutions in the development.

Varieties of institutional economics are available to evaluate varieties of capitalism. These methodologies dig behind preferences and technology to arrive at the ground on which agents make choices. The individual is at the foundation of these edifices, neoclassical and otherwise. Consequently, the denouement of all these models is that the market knows best in the absence of effective counterfactuals. A natural corollary is that the task of the government is to set effective mechanisms in place in order to approach the best outcomes. In contrast, we propose a framework which contends with the modern economy as an aggregate that evolves in historical time. Problems like effective demand failures are endemic to capitalist economies. Therefore, systematic State intervention is essential to their functioning. In particular, political economy teaches us that intervention must be in the interest of wage earners. In contrast to the earlier model, the fabric of norms and conventions that facilitate the growth and development of economies must emerge from the consciousness and practices of the working class.

This is a commentary to a well-known paper of Bresser-Pereira: The two methods and the hard core of economics. Therefore, it target a very suggestive article that seeks to examine the conceptions of man of classical political economy and Keynesian economics in contrast to the reductive conception of man found in positive economic theory, especially in neoclassical theory. It shows that both conceptions at large think with abstracts economic men. However, the first one reasons with individuals who are determined by the historical and social structures of the capitalistic economic system. The second one seeks to present them in a formal way, as if they were mere pieces of a large automaton, i.e. the mercantile system as a large and standardized mechanism. In the end, Marx is distinguished because he does not reflect based on a static anthropological foundation. For him, men are subjects that become because they can realize themselves only in the course of history.

The (un)predictability of the crisis and the pluralism in Economics.
Luís Felipe Lopes Milaré
Brazilian Journal of Political Economy
View Article

This paper discusses the predictability of the last global economic crisis relating it to the lack of pluralism in Economics. In order to do so, first is presented a literature review of the development of economic theory in recent years. Then the two main views on the predictability of the crisis are presented: (1) the economic models used to understand the economy did not incorporate bubbles so, the crisis was unpredictable; and (2) the crisis was predictable when applied other methods of understanding the economy.

JEL Classification: B4; B5.

The paper analyses the US-Brazilian relations during the formulation and implementation of the Three-Year Plan by the government of João Goulart. The evidence suggests the limited economic assistance offered by the United States to Brazil, driven by political causes, played a major role in the Three-Year Plan’s demise. It is argued that Goulart’s links with the radical left, particularly with groups seen as communists by Washington, was the main reason behind US decision of blocking resources. The conclusions are relevant because scholars have emphasized domestic reasons only to explain the failure of the Three Year Plan.

Complementarity of trade between Brazil and Japan with a view to a free trade agreement
Silvio Miyazaki, Nobuaki Hamaguchi
Brazilian Journal of Political Economy
View Article

Japan has signed free trade agreements as trade policy since 2002 and three countries have already signed in Latin American. Considering the intention to carry out an agreement with MERCOSUR, this article aims to analyze the complementarities between Brazil and Japan trade structure by revealed comparative advantages indexes, with World Bank data for the period between 2006 and 2008. The results show a comparative advantage in primary commodities to Brazil and in industrial products to Japan, as well as indicating sectors that may oppose to trade liberalization.

This article examines the political economy of public resources distribution in Brazil’s federal system in 1985-2004. We propose an empirical exercise to analyze how the country’s federal governments deal with the tradeoff between the provision of material wellbeing to sub-national governments (the states in our study) and the pursuit of political support from the latter. To identify the determinants of the transfer of resources from the federal government to the states, a set of economic, political, and institutional variables is econometrically tested. Based upon instrumental variables estimation for panel-data models, our estimates indicate that in Brazil the pursuit of political goals prevails over social equity and economic efficiency criteria: higher levels of per capita transfers are associated with the political makeup of governing coalitions, while larger investments in infrastructure and development by the states are associated with a lower amount of per capita resources transferred to sub-national governments. Our findings also suggest a trend toward the maintenance of interregional inequalities in Brazil, and show the relevance of fiscal discipline laws in discouraging the use of the administrative apparatus for electioneering.