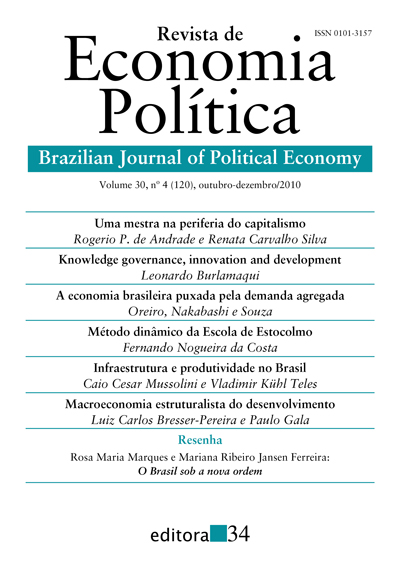 Infrastructure and productivity in Brazil

This article analyses the relationship between infrastructure and total factor productivity (TFP) in Brazil during the second half of the twenty century. Public capital is used as a proxy for infrastructure capital. The hypothesis to be tested is that an increase in infrastructure — more than than a rise in the private capital stock— has a positive effect on productivity on the long run. In that sense, it was used the Johansen methodology for testing the cointegration between TFP and the public/private capital ratio. In fact, it was found that this complementary relation (public-private) helps in explanning TFP’s path from 1950 to 2000. The results were robust to different measures of productivity and the public/private ratio. In addition, the short (medium) run analysis has indicated that shocks in this ratio have a significant effect over the TFP, but the opposite is not true. Therefore, the cuts in infrastructure investment could be a possible explanation for the TFP’s fall during the 70’s and 80’s.