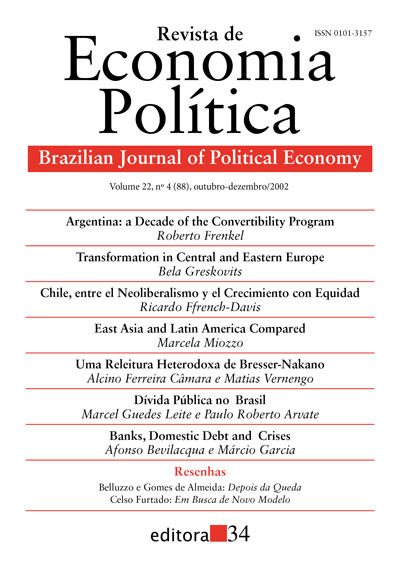 This article is an assessment of the Convertibility period in Argentina, which covered the nineties. It is presented in two sections. In the first section macroeconomic performance is described and evaluated, together with the effects on employment, unemployment and income distribution. An important contraction in full employment and significant increments in unemployment and involuntary underemployment are stressed. As from the mid-nineties, income distribution shows a strong worsening trend and the poverty and indigence indicators tend to rise. The increment in unemployment stands as the main explanatory factor of the worsening of social conditions. In the second section different aspects of the Convertibility Regime are discussed: the appreciated exchange rate, the dollarization of the financial system, the accentuated dependency on capital flows, the external sustainability and the regime durability.

What is attempted in the East is catching up with the West from a recent position of worse-than-Latin-American economic backwardness. Until now, populations that were sentenced to political patience by the logic of poor democracies have reluctantly backed this enormous effort. Central and Eastern Europe’s post-socialist path is characterized by an increasingly discredited ideology of a return to Europe and a non- European combination of substitute institutions of development: radical opening towards the world economy, damaged institutions of labor representation, eroded state capacity, and often strong private and foreign dominance in the financial and other strategic sectors. There is a chance for a few countries to succeed. Yet various development traps may be more likely in the end than a “Great Spurt” in the Gerschenkronian sense.

During Pinochet’s dictatorship deep reforms were implemented in Chile. Certainly, many of them constituted permanent achievements for development strategies in democracy. However, economic growth between 1973 and 1989 was mediocre (averaging only 2.9% annually) and income distribution deteriorated notably. This was related to the fact that the reforms suffered from various flaws that had severe repercussions on the growth of potential GDP and on social welfare. In the 1990s, the governments of the Concertación launched several reforms to the reforms with the goal of injecting “pragmatism”. It focused on decreasing macroeconomic vulnerability when faced with an increasingly volatile external environment and on completing underdeveloped domestic markets. The result of the set of reforms to the reforms was that, during the entire decade, there was an unprecedented vigorous expansion of productive capacity (which averaged 7% per year), along with a significant reduction in poverty (from 45% to 21% of population). A recessive gap in 1999-2001, however, highlighted failures, increasing contradictions and the lack of greater reforms to the reforms.

East Asian countries have been successful at specialising in machinery and capital goods. Latin American countries, on the other hand, have retreated from these sectors, reinforcing their specialisation in resource-intensive goods. Institutional arrangements in place in both regions explain these divergences. In particular, the differences in the strategy and structure of leading firms, the nature of industrial promotion by the government, the development and support of small and medium-sized firms and the operation of foreign-owned firms may explain the respective success and failure in sectoral specialisation in machinery. Failure to develop these sectors may hinder the process of economic development.

The purpose of this article is found a theoretical apology to the debt public allocation on agents’ finance wealth given the successive defaults enforced by public sector to debt public demanding.

The purpose of this paper is to show that Adam Smith’s work is indeed unified as can be seen from the fundamental concepts pervading both The Theory of Moral Sentiments and The Wealth of Nations. This approach opposes the canonical reading of Adam Smith’s work, in the sense that it links together four key concepts nested parities in a successive chain of three intersecting groups leading, ultimately, to the unified understanding of his contribution, apparently disperse into several independent pieces. The four concepts organized into three groups are: experience and imagination, imagination and morality and morality and self-interest. The conclusion is that, according to Adam Smith, The Wealth must be read in the light of the TMS; the invisible hand feeds back on the actual morality, economy and moral come together without any conflict under the justification of the social order provided by the market.

The self-regulated nature of capitalist economic systems cannot be understood through the concept of equilibrium, as neoclassical economics does. A new way to create a systemic theory of the economy has been opened by the concept of autopoiesis. Starting from Marx’s proposition of the founding character of social relations for economic systems and combining it with the autopoietic theory it is possible to propose a systemic theory of economics. In the first section it is made a characterization of autopoietic systems and argued that developed capitalist economic systems belong to this kind. In the second section, economic dynamics is presented as adequate to the nature of autopoietic systems.

This paper discusses the biomedical innovation system. This sectoral system is an intersection between the innovation system and the welfare institutions. The innovative dynamics in the health sector has various distinctive characteristics, specially the importance of the universities and academic research for the biomedical innovations. The specificity of health care as an economic activity explains the role of institutions in this sector. Institutions and regulation shape the direction of technological progress, influencing the economic, industrial and social performance of the whole health sector.

Bresser-Pereira and Nakano argue, in their article on stable growth, that the fiscal adjustment has already been effectively carried out in Brazil. For them, what needs to be done, contrary to the orthodox demands for more fiscal adjustment, is an active commercial and industrial policy to stimulate exports, to complement the lower interest rate and a more devalued exchange rate. It is suggested here that capital controls would be necessary to maintain relative exchange rate stability, following Keynes’ heterodox ideas.