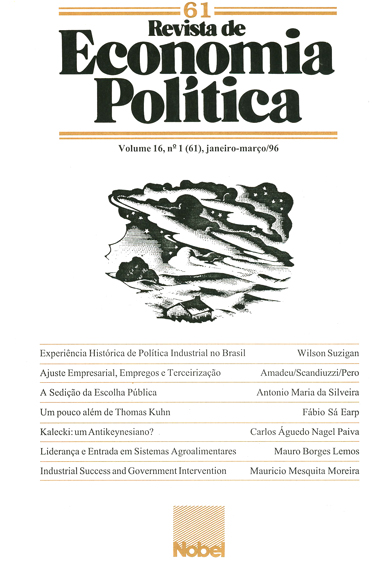 This paper studies the practice of industrial policy and the corresponding effort
of institution building in Brazil from the 1930s to the 1970s. The argument is that, although
that practice and the respective institutional organization succeeded in the structuring of
Brazilian industry into a process of convergence towards the international industrial structure
and technological development patterns up to the 1970s, they showed themselves not
functional in catching up with the structural changes and the new technologies of the 1980s.
The paper concludes by pointing that both the established practice of industrial policy and
the related institutional organization led to a normative and institutional lock in which,
together with the political inertia, hindered the necessary changes at the beginning of the
1980s.

Given a significant element of truth in “Public Choice”, a modest element must be found when a similar approach is made to the behavior of economic scientists. Harry Johnson found this in “The Keynesian revolution and the monetarist counter-revolution”. Following him, 1 find more in the Public Choice “Revolution” itself. The basic visions, assumptions and methods of the latter are appraised within its time-space stream. This approach is a complement to the Sociology of Knowledge (Thomas Kuhn), and may be taken as an embryonic Economics of Knowledge (Neoclassical). Requirements for the success of scientific revolutions is the theme.

This article suggests a revitalization of the History of Economic Thought by the
adoption of new methods from the modem study of sciences. It shows the new horizons
open by this approach, which has its origins in the Kuhn’s classical work. It ends giving as
an example a case study based on the actor-network theory.

This article aims to investigate the determinants of the limited diffusion and
theoretical acceptance of Kalecki’s work. In my opinion, the roots of the resistance to
this author comes from the unusual way he combines the theoretical, methodological and
analytical elements in his work. More specifically, it’s necessary to notice that, despite the
theoretical substratum of his work is keynesian, the pattern of investigation and exposition
used by Kalecki is structuralist and comes up against Keynes’ methodological individualism.
This contradiction – the center of Keynes and Kalecki’s usually hard dialogue – also limits
the dialogue with those two other schools our author considered scientific in Economics, the
Marxism and the (neoclassical) Econometrics.

The aim of this paper is to understand specific entry conditions into technology in the agro-food system and how these conditions have facilitated market leadership in that system by newly industrializing countries with natural resource endowments. The analysis is focused on the Brazilian case.

Who has the most resources to govern? A comparison between states and local governments per capital revenue
David Rosenblatt, Gil Shildo
Brazilian Journal of Political Economy
https://doi.org/10.1590/0101-31571996-0871
View Article

This paper examines differences in per capita revenues across Brazil’s states and
capital municipalities. It provides a theoretical overview of Brazil’s fiscal equalization programs
(the State and Municipal “Participation” Funds). The paper then provides evidence
that these programs are not only failing to meet their equalization objectives, but in addition
they are creating distorted patterns of revenues per capita across states and municipalities:
some economically poor states and municipalities have revenues per capita far above the
national average. This pattern of revenues per capita should be brought to the public’s and
policy makers’ attention so that they may: (i) better evaluate the performance of state and local governments, and (ii) better evaluate proposals for revising Brazil’s system of fiscal
federalism.

The superiority of industrial performance in East Asian countries, particularly in
the face of their counterparts in Latin America, had a strong impact on the debate about the
relationship between state intervention and industrial performance. The structuralist paradigm
was quickly replaced by a new orthodoxy whose recipe for success is a minimalist state
and an open economy. This article seeks to show that, although the opening of the economy
is a fundamental ingredient, its complement is not a minimalist state, but an interventionist
one. Not the Latin American type, but one that restricts its actions to major market failures.

Relative prices and concentration in the Brazilian industry: analysis of the expansion and retraction phases of economic activity from 1974 to 1994
Claudio Seiji Sato
Brazilian Journal of Political Economy
https://doi.org/10.1590/0101-31571996-0829
View Article

This paper examines the relative price’s behavior of the Brazilian industry in the
phases of expansion and retraction of the economic activity level between 1974-1994. The
results suggest that relative prices of the oligopolistic sector accelerate more (less) in periods
of recession (expansion) then the competitive sector. The main conclusion is that given the
differentiated behavior in the price and low competition of the majority of the Brazilian
industry, it is likely that the recession result of a restrict economic policy will be absorbed by
the competitive sector “in favour” of the oligopolistic sector.