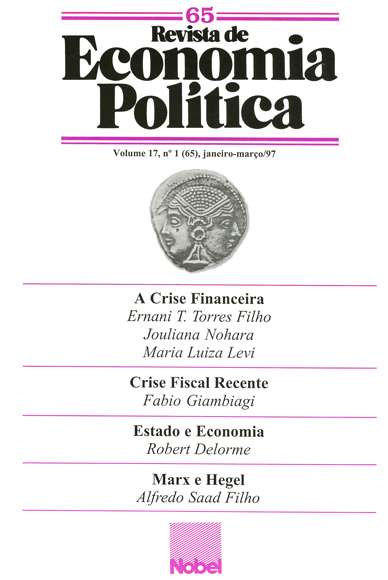 The crisis of the Japanese economy in the 90s: impacts of the speculative bubble
Ernani Teixeira Torres Filho
Brazilian Journal of Political Economy
https://doi.org/10.1590/0101-31571997-1017
View Article

From 1953 to 1992, Japan reached the highest economic growth rates among
industrialized countries. This performance was achieved despite two oil shocks and the endaka
– the continuous rise of the yen vis-à-vis the dollar. This long-term growth cycle came
to a sudden halt in early 90’s. Japanese economy stagnated while other industrialized countries
continued growing. This was mainly due to the “economic bubkle” burst. From 1990
to 1992, the value of urban land and of the stock market index were cut to almost half. As
a result, Japanese banks accumulated US$ 800 billion performing assets. This paper intends
to analyse the Japanese “bubble economy crisis” and its long-term impacts on the Japanese
economy, on its financial system and on its bilateral relations with the United States.

This essay aims at outline the theoretical discussions about the financial crises.
Three approaches explain the event: the monetarist, the asymmetric information approach
and the financial instability hypothesis. The first one proved inadequate when confronted
with experience. The other two have in common the attempt to include the financial market
with all its institutions in the economic analysis. Nevertheless, they differ in the conception
about the operating mode of the economy.

This paper examines the institutional environment of the Japanese financial system
and its role in the asset price bubble and financial crisis. The deregulation process of the
80s eliminated various rules that had previously been used by the government to monitor
the economic growth through monetary and credit policies. Banks turned to more risky operations
and, under a period of low interest rates, contributed to drive liquidity to speculative
sectors, which were at the center of the asset bubble. The change in monetary policy put
an end to the rise of asset prices and resulted in default of many borrowers. Since 1991 the
Japanese banking sector is trying to absorb the huge volume of non-performing loans of its
portfolio related to this process.

This article updates the discussion of the fiscal situation of the central government
in Brazil. It is shown that, between 1988 and 1995, the National Treasury revenues
increased almost 3% of the GDP. Consequently, during 1990-1995, the central government
exhibited a fiscal equilibrium, a better result than the average deficit of 2.8% of GDP observed
in 1985-1989. Despite these numbers, some problems of the current situation of the
fiscal accounts are highlighted and the increasing weight of the wages and Social Security
expenditures, (a) which together jumped from 47% to 60% of the revenues between 1988
and 1995, (b) is pointed out as the most important reason for the budget constraint of the
majority of the ministries.

This paper is built on the premise that frameworks of representation and worldviews
are important for reflection and decision in economic policymaking, becoming more
important as the stakes are high and the future is uncertain, as in Central and East European
countries. There appears to be a growing feeling of discrepancy between the errors that were
made, though based on a rather unified body of scientific economic theory, and differing
views advocating more pragmatism and less overconfidence in economic analysis. The latter
however are scattered and suffer from the absence of a unified theoretical framework although
sharing several basic features which are not perceived. This paper attempts to reflect
on such alternative.

The “new dialectic” offers a new interpretation of Marx’s method. Its most salient
feature is the emphasis on certain aspects of Hegelian logic for the interpretation of
Marx’s writings, especially The Capital. This article systematically presents the “new dialectic”
argument and the main problems with this approach. The latter derive from the assumption
that the richness of the concrete is contained in the commodity and can be revealed
only through dialectics. This view is deficient because it neglects the influence of historically
contingent elements on concrete reality, and its role in Marx’s analysis.

The purpose of this paper is to demonstrate how important is to build up a
theoretical framework to properly grasp the meaning of the federalism issue in Brazil. Firstly,
we make a survey of the main theories approaching the federalism subject in order to
analyze whether they fit or not in the Brazilian case. Focusing then on the recent literature
about Brazilian federalism, we show how its lack of analytical perspective fails to explain
the interactions between the different levels of governments occurred in the last decades. For
this reason, we propose a line of research adjusted to the Brazilian federalism issue, which
must take into account not only the specific political environment existing in that country,
but also the rationality of the institutions and social organized groups involved in that federative
settling.

This article examines the changes in the behaviour of the banking firm strategies,
risks, credit supply and revenues – in a high inflation regime.

When the exchange rate is overvalued and the trade balance is negative, there
are three forms of devaluating the local currency: direct devaluation, fiscal adjustment, and
increase of productivity at a higher rate than the competitors. The three forms involve a
change in relative prices, with the reduction of the prices of nontradables in relation to tradables,
and, so, a relative reduction of real wages. Productivity increase is a first best, since
it does not entail real wage reduction, fiscal adjustment is a second best since it is anyway
necessary and does not contain the risk of inflation. Given this risk, direct devaluation is a
third best. Yet, since it is difficult to control productivity increase in the local economy and
impossible in the competing ones, and since fiscal adjustment leads to devaluation only indirectly
as it reduces the demand for non-tradables, quite often policymakers resort to the
third best alternative.