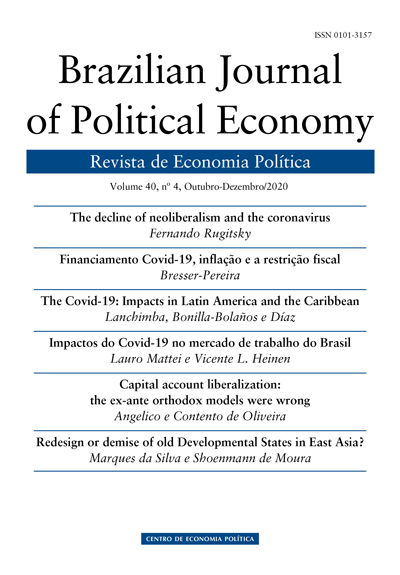 This paper aims to examine the political and economic consequences of the pandemic caused by the new coronavirus, setting it in the context of a Gramscian interregnum. First, the dismantling of the triangular articulation of the world market that characterized the decade before 2008 is examined. Second, the global protest wave and the electoral shifts observed since 2010 are interpreted as evidence of a crisis of neoliberal hegemony. Together, the economic and hegemonic crises represent the interregnum. Last, it is argued that the fight against the pandemic may lead to the overcoming of neoliberalism.

The COVID-19 pandemic is producing an economic depression that could be substantially reduced if the state in each country, besides making the required health spending, compensates the companies and households that are losing with the social distance and lockdown policies. Governments limit their expenditures to not increase the public debt. There is, however, the possibility of the central banks buying new securities from the respective treasury to finance such exceptional expending. Considering the several economic constraints that policymakers face, this policy will not conflict with the inflation constraint. Money is an endogenous variable that does not cause, but just validates a going inflation. It conflicts partially with the fiscal constraint but avoids the increase of the public debt. And in this case there are no bad consequences of fiscal indiscipline – excess demand that, successively, causes increase in imports and current account deficits that, successively, appreciate the national currency, accelerate inflation, and lead to currency crises. Monetary
financing of the COVID-19 will not cause any of these three evils.

This paper provides some theoretical scenarios the socioeconomic impacts caused by the COVID-19 pandemic for the Latin America and the Caribbean (LAC). To do so, after a brief literature review of previous pandemics, we use the macro and microeconomic theory, together with aggregated data, in order to provide expected implications of the COVID-19 pandemic for the LAC region. At a macroeconomic level, we explain how the COVID-19 shock is causing both aggregate supply and aggregate demand to reduce so plunging the region into a recession and why such a recession is dangerously harmful for the LAC economies. At a micro level, we describe why some enterprises would adapt to remain in the market or even growth; by contrast, some of them would leave the market in the short term. For the consumers, the impact of this sanitary crisis is related to the change in their preferences and household members’ relations due to extended quarantines.

This article analyzes the possible effects of the economic crisis associated with the COVID-19 pandemic on the Brazilian labor market. In the first part of the work, recent data from the Continuous PNAD is analyzed to establish a brief overview of the labor market on the eve of the pandemic, highlighting the main trends on the evolution of unemployment and occupation in the different sectors of economic activity, as well as on income from work. In the second part of the study, the measures adopted by the Federal Government with regard to employment and income and their probable impacts on workers are discussed. Finally, the third contains the final considerations of the work, a moment in which it seeks to elucidate the main problems for the workers’ agenda in the face of the new economic, social and political situation in the country.

The financial crises in emerging economies during the 1990s and 2000s propelled academia and multilateral institutions to investigate whether the promised benefits of capital account liberalization were being delivered or not. In the course of empirical studies on the subject, many ex ante theoretical assumptions on financial globalization were demystified, and previously unknown risks and dysfunctions began to be evidenced. This article analyzes the main empirical studies on the effects of financial globalization published in the last two decades and shows that the main conventional assumptions that were built to theoretically base the capital account liberalization processes that occurred in the 1980s and 1990s were wrong.

This article investigates comparatively the recent developmental dynamics of four East Asian political economies: Japan, South Korea, Taiwan and China. We analyze how the critical juncture engendered by the systemic crisis of the US subprime impacted on its State capabilities, particularly regarding industrial policy, being mediated by the respective regulatory and institutional frameworks. Additionally, we compare the impacts of the 2008 crisis and the previous Asian regional crisis of 1997. Our findings indicate that State capabilities, associated to the historical construction of a Developmental State, were a central feature to understand the resilience of each political economy.

This paper provides a theoretical account of the role of regional differences in cyclical patterns of credit availability for patterns of regional convergence or divergence. While mainstream theories imply either equalising regional capital flows, or else lower credit availability for peripheral regions due to market imperfections, Post-Keynesian theory of liquidity preference and financial structure imply the scope for greater credit volatility for peripheral regions, especially in downturns, contributing to real economic divergence. This latter account is assessed by means of an empirical analysis of patterns in bank credit over the business cycle among the Spanish regions and Eurozone countries.

The origin of human ultrasociality – the ability to cooperate in huge groups of genetically unrelated individuals – has long interested evolutionary and social theorists. In this article, we use cultural group or multilevel selection theory to explain how cultural traits needed to sustain large-scale complex societies necessarily arose as a result of competition among cultural groups. We apply the theory at two key particular junctures: (i) the emergence of the first States and hierarchical societies, and (ii) the Rise of Modern Nation-States and the associated Great Divergence in incomes between the West and the “Rest” that began in the eighteenth century.

This article aims to analyze contemporary capitalism in the light of Marx’s contribution in The Capital. For this, in the first part their understanding of money capital, interest-bearing capital and fictitious capital are discussed, emphasizing the fetishized aspects and the autonomy that the latter achieved in relation to the production of goods, that is, new value. In the second part, the volume assumed by fictitious capital in world capitalism and its consequences for the interior of companies and for the maintenance of employment, among others, are analyzed. Among its conclusions, it is pointed out that this relative autonomy does not constitute an anomaly or cancer. On the contrary, it is an expression of the logical development of the capital form, when there are no restraints on it, given the situation of retreat in which workers are at the international level.

This paper´s aim is to demonstrate how South American regional rivalry influenced Brazilian developmentalism. During the early years of the XXth century, Army officers created a military paradigm which associated the defense against Argentina with the need for political centralization and industrialization. With the Revolution of 1930 this geopolitically-oriented developmental thought became a tenet for the Army High Command which, using the Army’s new position in national politics, decisively backed development initiatives in the petrochemical, steel and transportation sectors. Regional geopolitics was, therefore, one of the key variables at the onset of Brazilian developmentalism.