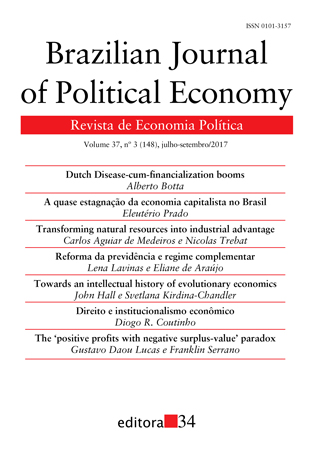 We formally investigate the medium-to-long-run dynamics emerging out of a Dutch disease-cum-financialization phenomenon. We take inspiration from the most recent Colombian development pattern. The “pure” Dutch disease first causes deindustrialization by permanently appreciating the economy’s exchange rate in the long run. Financialization, i.e. booming capital inflows taking place in a climate of natural resource-led financial over-optimism, causes medium-run exchange rate volatility and macroeconomic instability. This jeopardizes manufacturing development even further by raising macroeconomic uncertainty. We advise the adoption of capital controls and a developmentalist monetary policy to tackle these two distinct but often intertwined phenomena.

On the explanation for the quasi-stagnation of the capitalist economy in Brazil
Eleutério F. S. Prado
Brazilian Journal of Political Economy
https://doi.org/10.1590/0101-31572017v37n03a02
View Article

In this article, we examine three important lines of explanation for this historical occurrence that has lasted almost four decades. We discuss perspectives that fit into three labels: neoliberal, new developmentalism and Marxist. However, not only from the scientific focus, but also from the justification and/or the economic-political critique of the existing reality point of view. The dependency in the periphery-center relation, inside the horizon of the possible duration of capitalism, appears as a central question. The economic policy of governments figures as important, but without primacy over the structural evolution of capitalist social relations. The conclusion does not flirt with any form of optimism about progress – on the contrary, it sees the future as very difficult.

This paper analyzes the development of China’s rare earths industry, emphasizing the role of state technological initiatives in the country’s transition from rare earth exporter to large industrial consumer of these raw materials. Like other industrial powers before it, China takes advantage of low-cost domestic supplies of strategic raw materials to promote higher value-added manufacturing. We argue that, in the case of rare earths, this strategy has been largely successful, disrupting a classic international division of labor that existed prior to 2000, in which China exported most of its rare earth output to wealthy countries, and transforming Chinese firms into exporters of more sophisticated downstream products.

This review paper examines some of the main Marxist-inspired interpretations of the Great Recession that were published in the form of books. From the broad set of publications on the subject, the following works were analyzed: The Great Financial Crisis, by John Bellamy Foster and Fred Magdoff (2009); The Enigma of Capital, by David Harvey (2011), originally published in 2010; The Crisis of Neoliberalism, by Gérard Duménil and Dominique Lévy (2011); and The Failure of Capitalist Production, by Andrew Kliman (2012). It is argued that the Marxist debate about the ultimate causes of the Great Recession can be systematized from the following cleavage: 1) on the one hand, the authors who attribute the turbulence to the specific political/economic/institutional form assumed by the capitalist system over the last decades; 2) on the other hand, those who interpret the recent crisis as a manifestation of capitalist dynamics in general - and not the particular form that it supposedly assumes. While Foster & Magdoff (2009), Harvey (2011) and Duménil & Lévy (2011) belong to the first group, Kliman (2012) is a representative of the second strand.

Our inquiry considers the origins of Evolutionary Economics by reintroducing a debate that took place in Russia in the 19th and early 20th century. Responses to Charles Darwin’s The Origin of Species are considered, especially critiques stressing Darwin’s emphasis upon competition and struggle in natural ion, that can be traced directly to Thomas Robert Malthus. Considering challenging contributions made by several Russian scholars, we place special emphasis upon Peter Kropotkin’s focus on cooperation and “mutual aid” in natural ion and evolution. We then speculate upon the commonality found in the evolutionary views advanced by Kropotkin and his American contemporary, Thorstein Veblen.

The article explores the legal dimension that underlies the works of different institutionalist schools. It argues that analysis centered on institutions – in particular, the so-called institutionalist political economy – unveils an opportunity for the legal field, and legal scholars to take part in the rich dialogue about economic development and its puzzles. This results from the fact that institutionalism is an eminently transversal and interdisciplinary field, in which social sciences agendas can achieve shared gains and cross-fertilization.

This paper explains the “positive profits with negative surplus-value” example of Steedman (1975) and shows that while in joint production systems individual labour values can be negative, the claim that the total labour embodied in the surplus product of the economy (surplus-value) can also be negative is based on assumptions that have no economic meaning (such as negative activity levels).The paper also provides a way to measure the surplus-value of joint production systems which overcomes the problems of the traditional concept and restates the proposition that a positive amount of surplus labour is a necessary condition for positive profits.

This article examines how pay as you go (defined benefit) public pension system relates to a fully funded complimentary regime (or defined contribution pension), in the context of a renewed attempt to reform public retirement benefits in Brazil. After featuring the main characteristics of the public pension system and how the fully funded private regime has evolved as of late, this paper questions the idea that the latter would be more beneficial to the increase of private savings and, as a result, of investment, aspects that are crucial for the development of Brazil. The findings suggest that the fully funded private regime, rather than incentivizing investment growth and the stock market, tends to reinforce income concentration, which is by all standards already alarming in Brazil.

This paper aims to advance the debate on Multi-sectoral Thirlwall’s Law, including sectorial capital flows and its implications for the new Brazilian economy's growth strategy, which aims to stimulate exports through diversification of products, the aggregation value and increased technology intensity of Brazilian exports. To this end, it develops a multi-sectoral model with sectorial capital flows and, as a result, are carried out some computer simulations considering the main sectors and economic partners of the country (China, United States and the Euro block). The results suggest that the best strategy is to encourage specific sectors, that is, increase the participation of the sectors that the country has comparative advantage in relation to each of its trading partners (Manufactured – US, Semi-manufatured – Europe, Primary – China). Despite the results obtained in the simulation, the model templates proposed by Hausmann et al. (2004), can generate the acceleration of economic growth. Thus, the National Plan for Exports (2015-2018) should give preference to the expansion of incentives to sectors that have high ratios of elasticity in the sense of Thirlwall.