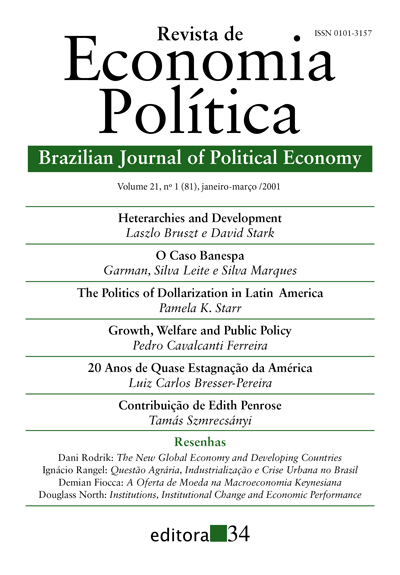 State capacity to resist powerful predatory economic groups is highly dependent on the way social diversity is represented within the polity. Such state capacity is weak when a single branch of government can usurp the representation of public good between two elections. ln some democracies that I call heterarchies, coalition partners, parties in different houses of the legislature, different levels and branches of government, autonomous state agencies compel executives to take into account diverse modes of representation while making their programs and policies. Such constraints on executive authority allow the state to rise above the direct distribution of powers and interests within the economy. ln the paper I use the Russian case to analyze the relationship between state weakness and the related problems of economic development.

This paper explores the concept of heterarchy as an organizational form that is an alternative to hierarchies and markets. Heterarchies are characterized by lateral accountability and multiple organizing principles, or in different terms, by distributed intelligence and the organization of diversity. Empirical materials are drawn from the contemporary Hungarian economy where firms operate in an environment of institutional uncertainty. An analysis of the ownership structure of the largest 200 firms and the top 25 banks identifies distinctive network properties created by ties of inter-organizational ownership. Heterarchy contributes to flexibility; but the interweaving of multiple logics of justification poses new problems of accountability.

This article indicates, through the case study of the Banespa federalization process, that there should be serious reservations concerning the current idea that there was centralization of power in the central government enforced by the federal executive in the 1990’s. The Banespa case is a critical case study as it demonstrates that the restructuring of the state banking system is not caused by federal government in the name of the maintenance of economic stabilization process. The authors argue that the agreement involving the situation of state banks was the fruit of a political bargaining between the state government and the federal government. Thus, the current restructuring of federative system can be better explained by a bargaining process between the branches of the government than by the restructuring enforced by the top people.

The capacity of dollarization to generate stable growth in Latin America despite occasional instability in the international financial system has been the subject of significant economic analysis in recent years. Yet very little attention has been afforded to the politics of the issue. This paper attempts to fill this void by looking at both the political and the economic factors which influence the policy effectiveness of dollarization. The paper reviews the theoretic and policy debate within which the dollarization question is situated and then develops an informal model of the political and economic variables which influence the viability of dollarization. It concludes that although dollarization may be the correct policy choice for some Latin American countries, it is unlikely to benefit the majority. Most Latin American countries would benefit more from directly addressing the forces know to promote economic instability.

The process of globalization, the emergence of new technological paradigms, the increasing introduction of market mechanisms in the economies and the formation of regional trade blocs, have brought about deep productive restructuring amongst the various sectors of human activity. These changes are forcing the policy makers to envisage new ways of intervention in the regions, in all countries, so that they can face the new challenges that regional development is posing in the present days. This work attempts to present the major aspects of a new world scenery, characterized by the introduction of processes of productive flexibilization and the creation of new industrial spaces and makes a case study of restructuring in the shoe industry in Brazil.

ln this note the growth and welfare effects of fiscal and monetary policies are investigated in four economies where public investment is part of the productive process. It is shown that growth is maximized at positive levels of income tax and inflation but that there is no direct relationship between government size, productivity and growth or between inflation and growth. However, unless there are no transfers, no political conflict or public goods in the economy, maximization of growth does not imply welfare maximization and the optimal tax rate and government size are greater than those that maximize growth. Money is not superneutral and the optimal rate of money creation is below the maximizing rate of growth.

ln the last three decades the agricultural sector of the less developed countries has lost competitiveness. The strong agricultural policy would explain the gain in the most developed countries. Their agricultural policy didn’t change, even when the government adopted a liberal strategy. Only European Union has demonstrated gains in competitiveness during all of the time. If we consider that at the beginning it showed the worst situation in terms of comparative advantage, we can conclude that its Common Agricultural Policy has caused big trade diversion and contributed to the reduction of the world economic efficiency.

Latin America remained almost stagnant in per capita terms in the last twenty years. The original causes are well known: the interrelated debt crisis and the fiscal crisis of the state. But why Latin American countries took so long to recover macroeconomic stability? Not only because fiscal adjustment and market oriented reforms were checked by interest groups, but also because, even when policymakers were free from political constraints, they nevertheless often made serious policy mistakes: mistakes that derived from technical or emotional incompetence, and from a subordinate “confidence building” strategy, that implied doing everything they supposed international agencies and financial markets would expect in order to achieve credit and credibility, instead of using their own judgment to make decisions and design required reforms.

This paper reviews the contributions of Edith T. Penrose (1914-1996), to the theories of technical progress within oligopolistic competition. It is mainly based upon chapter VII of her seminal Theory of the Growth of the Firm, published for the first time in 1959.