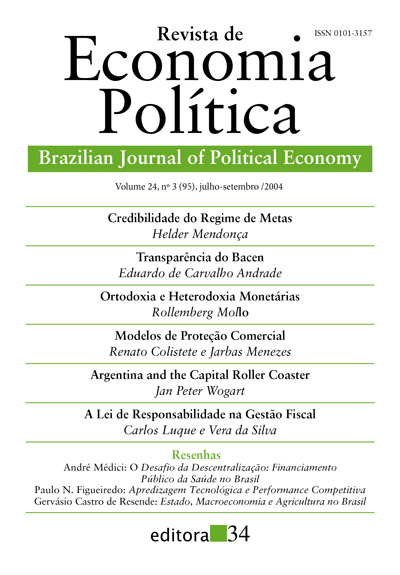 The paper reviews the controversies on the neutrality/non-neutrality of money in the History of Economic Thought establishing criteria for the classification of orthodoxy and heterodoxy, especially in what concerns monetary issues. The article emphasizes the non-neutrality of money on the perspective of the Marxian monetary theory of inflation, making its point on the differences of the Monetarist theory of inflation.

The aim of this paper is to apply two indexes for measuring the credibility of the inflation targeting in Brazil and to analyze their outcomes. The findings denote that the framework adopted for this monetary regime in Brazil is not adequate for building credibility.

This paper compares the degree of transparency of the Brazilian Central Bank (Bacen) with the one verified in other ed Central Banks (CBs). Following the methodology developed in Hann and Eijffinger (2000), we constructed an indicator for transparency based on: (i) how clear the CBs are with respect to their monetary policy objectives, and (ii) how transparent the CBs implement their monetary policy. The Bacen has become more transparent after adopting the inflation targeting regime in 1999. However, these more transparent procedures are not part of the law that regulates the Bacen, indicating that they can be easily replaced.

This essay analyzes the Argentine “Currency Board” experiment during the 1990s, both from a theoretical and historical point of view. It finds that earlier failed attempts to control inflation with a quasi fixed exchange rate in a highly politicized environment should have been a lesson to heed. While detailing the various shortcomings of the domestic economic policies, ample space is devoted to examine the gyrating international capital markets and their impact on the Argentine program. Moreover, it is maintained that the Argentine political environment, the stability of which was crucial for success in the early years, deteriorated to such an extent after 1996 that it significantly contributed to the breakdown of the economic program and the system itself. The essay concludes with a short consideration of the Chilean economic policies, which were characterized by a great degree of pragmatism and prudence and consequently succeeded to escape the dire fate of its neighbor.

The aim of this piece is to analyse, based on the post-keynesian framework, the relationship between the centrality and dynamism of regions and the behaviour of some regional financial variables at Brazil from 1988 to 2000. This paper undertake the analysis using a special geo-economic delineation presented by LEMOS, GUERRA e MORO (2000) and the existence of the polygon of development proposed by DINIZ (1993). The results shown the relation between centrality of a region and the presence of institutional characteristics those make the credit easier to be created during the overall analysed period.

The purpose of this article is analyzing the principal aspects of the new regulation, the so-called “ Lei de Responsabilidade na Gestão Fiscal” using the framework of the budget imbalance as a government failure. We pointed out that the principle of the new regulation is that if the government planning is highly detailed and the deficit is under control, we will observe neither inflation nor debt pressures. There are two great issues of control: limits to expenditures with personnel’s salaries and the amount of debt. The new regulation restrains the public action during the last year of mandate and deals with the importance of spreading information on fiscal issues and the public participation on the budgetary practices. Despite the good aspects of the regulation – especially on the last year of a given government’s expenditures, there are still some problems: the lack of discussion on the adequate size and functions of the government and the anti-cyclical component of the government action which is despised by the law.

This article addresses the problem of the genesis of the economic discourse. It argues that Adam Smith's work played an important role in delimiting the economic sphere because of: i) the specific nature of Smith’s moral philosophy; ii) the way he conceived the economy as an ontological domain. However, the article suggests that Smith's economic theory remained closely connected to his moral philosophy.

In the birth of modern Economics there is the statement that the social world is an unintended effect of individual decisions and actions, an environment of limited knowledge or “ignorance”. In the XXth century, two philosophers stood out as far as the development of this idea is concerned – Friedrich Hayek and Karl Popper. However, one cannot safely assert that Popper and Hayek were attuned with respect to the implications of ignorance to governmental intervention on economic activity. In this article, I argue that, in contrast to the liberal-conservative Hayek, Popper acknowledges an important legitimate role for government and democratic polity in perfecting social life, precisely on account of the problem of limited knowledge.

Protectionism has been an enduring source of international disputes since at least the nineteenth century. In the last decades, an array of nontariff barriers has created a new global phenomenon, the so-called New Protectionism, which once more shows the strength of the forces leading to the adoption of trade barriers by nations. This article aims to review representative analytical models which deal with the causes of protectionism. First, the article discusses historical political economy models and their focus on social groups, institutions and historical analysis. Second, the article addresses positive political economy models which bring organizations, interests and social actors into the framework of rational choice.