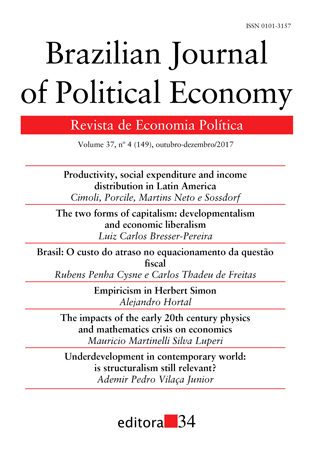 This paper discusses the role of institutions and structural change in shaping income inequality. It is argued that while social expenditure and direct redistribution are crucial for improving income distribution, sustainable equality requires structural change. The relative importance of these variables in different countries is analyzed and a typology suggested. It is argued that the most equal countries in the world combine strong institutions in favor of redistribution and knowledge-intensive production structures that sustain growth and employment in the long run. Both institutions and the production structure in Latin America fail to foster equality and this explains its extremely high levels of inequality. The paper presents empirical evidence that supports this view, based on a sample of developed and developing countries for the period 1990-2010. Institutions for redistribution are captured through social expenditures as a percentage of GDP, while the role of structural change is captured by indicators of the technological intensity of production and the evolution of labor productivity. The technological intensity of the production structure is proxied through two indicators, the Economic Complexity Index and the ECLAC Index of Technological Intensity.

This paper argues that the state and the market are the main institutions regulating capitalism, and, correspondingly, that the form of the economic and political coordination of capitalism will be either developmental or liberal. It defines the developmental state, relates it to the formation of a developmental class coalition, and notes that capitalism was born developmental in its mercantilist phase, turned liberal in the nineteenth century, and, after 1929, became once again developmental, but, now, democratic and progressive. All industrial and capitalist revolutions took place within the framework of developmentalism, whereby the state coordinates the non-competitive sector of the economy and the five macroeconomic prices (which the market is unable to make “right”), while the market coordinates the competitive sector. In the 1970s, a crisis opened the way for a short-lived and reactionary form of capitalism, neoliberalism or rentier-financier capitalism. Since the 2008 Global Financial Crisis, the neoliberal hegemony has come to an end, and we are now experiencing a period of transition.

In the present situation, the debt/GDP ratio in Brazil is increasing both due to the payment of interests and to a positive primary deficit. The later the fiscal adjustment is done, the higher must be the reduction of the primary deficit to attain long-run debt sustainability. This work makes the deduction of the cost of delay explicit and uses it to derive some data concerning the present Brazilian case. It considers three different scenarios and a two-and-a-half year period starting in June of 2016. The cost of delaying the adjustment is measured in terms of the additional reduction of the primary deficit relative to that which would have been necessary had the sustainability condition been met in June of 2016. Depending upon the scenario and on the concept of debt, a one year delay may demand between 0,14% and 0,67% of GDP of additional reduction of the primary deficit. The inertia may also lead to more uncomfortable figures, in case the average (logarithmic) yearly periodic real interest rate as of June 2016 exceeds 6,6%. Or if average GDP yearly growth is lower than -1,6% in the period considered.

This paper contextualizes Simon’s book, Administrative Behavior, within the evolution of his ideas arguing, contrary to what some have posited, that the common element that unites this book with the rest of Simon’s work is not the criticism of the classical approach, but an epistemological frame, based on an empirical methodology. This empiricism is the element that remained constant during his career and led him to introduce psychological factors when explaining the behavior of economic agents under his models of bounded and procedural rationality.

Through discussion of several authors, dealing with the process of mathematicization of the economy, we seek to clarify the progress of this process in the world. Mirowski (1991) analyzes this phenomenon and finds that it began more strongly from 1925. However, he does not show in his article as mathematics and physics qualitatively influenced the economy. This is our primary goal in this paper: an account, in a systematic way, of how mathematics and physics have influenced constitution of economics, culminating in the adoption of general equilibrium as metatheory and the generalization of the hypothetical-method deductive.

JEL Classification: B1; B4.

This paper intends to evaluate if the Latin American structuralist approach is still relevant to understand capital accumulation dynamics of peripheral countries and their insertion in the global value chains. It’s a theoretical paper that strives to improve the building blocks of structuralism with the incorporation of elements from different approaches to establish a nexus to understand capital accumulation dynamics in the periphery. Considering the relevance of technological accumulation, its impacts over the productive structure and over the international insertion, we strive to analyze factors that perpetuate income diversion in relation to the center. Under this perspective, we conclude that the particularities of peripheral economies changed their form of manifestation without effectively overcome the dependence relation.

The debate around the economic growth and environmental degradation is the hot topic among academics. However, up to a point, all of them embrace the uncontroversial view that tells us that anthropic factors have leverage on global climate. It happens that the so-called greenhouse effect is closely related to the accumulation of certain gases in the atmosphere, e.g, carbon dioxide, whose original source comes from productive sectors. Thus, our purpose in this article is to estimate the rate of emission intensity – here we mean the ratio between CO2 emissions and GDP – which has increased since the early part of the 20th century. To support that idea, this study reports on data from 24 different countries. In terms of C02 emission, the results undoubtedly show that United Kingdom and the United States highlight a negative picture, particularly when both are compared to India. It should be noted the presence of structural changes, which coincide with three major historical events: the World War I (1914-1918), the Great Depression in the 1930s, and finally the Oil-price shocks in the 1970s. As the result of the analysis demonstrates, the amount of emission produced by developing countries is surprisingly low. That the technology reveals its relative merit for reducing the overall emission intensity is transparently obvious.

The main aim of this paper is to demonstrate, through a review of China's economic reforms, that the emergence of a large private sector and the increased sophistication and diversification of industry has required the continual reorganization of activities between the state and private sectors of the economy. We argue in this paper that the state began to play a major role in important industries and in big finance, as well as in the coordination and socialization of investment, such as economic policy (monetary and fiscal), foreign trade and, especially, the launch of new and higher forms of economic planning.

This work analyzes how the recent Brazilian inflation responds to economic cycles and its inertial component considering different environments of forward-looking expectations in the framework of the Hybrid New Keynesian Phillips Curve (HNKPC). To do this, use is made of monthly data from January 2002 to August 2015 and GMM-HAC estimates of the HNKPC. The results suggest that Brazilian inflation still has a strong inertial component and that in an environment of lower predictability of economic agents, inflation seems to be more sensitive to cyclical fluctuations in economic activity. Finally, It was observed a positive and significant pass-through exchange rate to inflation in Brazil.

It is believed that actors of the National System of Innovation (NSI) influence and are influenced by regional aspects, like geographical allocation. Based on this perspective the scientific, technological and economical performances in sub-national divisions of nine developed and developing countries are analyzed in this paper. The aim is to evaluate the hypothesis on the existence of higher regional concentration of NSI actors in developing countries. The results suggest that this hypothesis may be correct, since S,T&I activities are more likely to be regionally concentrated in the richest regions in the developing countries analyzed, opposing what happens in developed countries.

The aim of this paper is to analyze the impact of the Chinese foreign exchange policy on foreign trade with the European Union. After describing the importance of the exchange rate in an open economy and some of the methodologies employed to calculate its equilibrium value, we examine whether the Chinese competitiveness is due to the existence of misalignment (undervaluation) of its exchange rate, or rather, to other sources of competitiveness. For this purpose, we use a Vector Error Correction (VEC) model to estimate a long-run exports equation. The empirical results indicate that over the past few years, Chinese exports have benefited from an ‘unfair’ competitive advantage resulting from the manipulation of its currency value.

This study aims to develop a multi-sector and multilateral model of balance-of-payments constrained growth. As a starting point, we adopted the models proposed by Araujo and Lima (2007) and Nell (2003). The paper also presents computer simulations to test how structural changes in the Pasinetti-Kaldor sense affect long-term economic growth. This approach is relevant insofar as it enables the identification of sectors and trading partners that contribute the most to long-term growth, as well as proposing economic and industrial policies that improve trade relations and economic competitiveness.

Comments on the paper "The exchange rate as an instrument of economic development"
Rodolfo Hoffmann
Brazilian Journal of Political Economy
https://doi.org/10.1590/0101-31572017v37n04a14
View Article