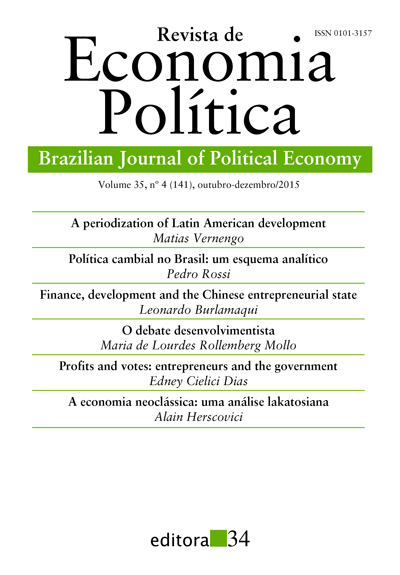 This paper analyzes Joan Robinson’s growth model, and then adapted in order to provide an exploratory taxonomy of Growth Eras. The Growth Eras or Ages were for Robinson a way to provide logical connections between output growth, capital accumulation, the degree of thriftiness, the real wage and illustrate a catalogue of growth possibilities. This modified taxonomy follows the spirit of Robinson’s work, but it takes different theoretical approaches, which imply that some of her classifications do not fit perfectly the ones here suggested. Latin America has moved from a Golden Age in the 1950s and 1960s, to a Leaden Age in the 1980s, having two traverse periods, one in which the process of growth and industrialization accelerated in the late 1960s and early 1970s, which is here referred to as a Galloping Platinum Age, and one in which a process of deindustrialization, and reprimarization and maquilization of the productive structure took place, starting in the 1990s, which could be referred to as a Creeping Platinum Age.

The paper’s central claim is that China’s speed and ability to leapfrog its peer-nations in the last three decades stems, largely, from the fact that it is a fully developed Entrepreneurial State (ES). The discussion seeks to dig deeper on ES as a bridging concept that fits well with the Schumpeter-Keynes-Minsky analytical framework and one that is particularly appropriated analyzing contemporary China’s development trajectory. Although rooted in a historical perspective and using historical examples, the main purpose of the paper is analytical, not descriptive.

The developmentalism debate. This article examines developmentalism, explaining why certain post-Keynesian propositions should be accepted from a Marxist perspective, and what should be modified within the former approach in order to fulfill a transformative role in society. It also critically contrasts the Marxian and post-Keynesian views of the roles of the state and the market, in order to justify policy alternatives to transform capitalist societies.

After more than twenty years of low housing construction output, the housing policy recovered its momentum in the country with the ascent of the Partido dos Trabalhadores (Workers’ Party, PT) to the seat of the federal government. This article demonstrates – through the analysis of documents, interviews and research conducted with businessmen – that the impetus of such a state policy is a part of the PT electoral strategy, which is based on economic growth and the expansion of social programs. The research analyses the dovetailing of interests between the Lula (the Brazilian President from 2003 to 2010) administration and the civil construction business – the latter concerned with expanding its business, and the former with increasing the supply of jobs and the level of economic activity. This process culminated in the launching of the largest social housing program to be implemented in the country. Minha Casa, Minha Vida (My House, My Life), is a project in whose planning building companies played a key role, performing feasibility studies and carrying out social housing projects.

This paper aims to define, from a Lakatosian approach, the neoclassical scientific research program (SRP). For such purpose, I will compare this SRP with the ones of the new institutional economics (Coase and Williamson) and the New Information Economics (Akerlof, Grossman e Stiglitz) and, by using the notion of implosion, I will highlight its limits. After discussing Lakatos’ method and drawing upon his approach to define the Neoclassical SRP, the paper defines and explain the Neoclassical SRP implosion.

This paper presents a measurement of the portion of the Brazilian ground-rent appropriated by agrarian landowners during 1955-2005 and assesses its importance relative to other forms of surplus value appropriated in the Brazilian economy. In pursuing this task, the paper also puts forward original estimations of several time-series that are crucial for the study of Brazilian long-term growth and development. Finally, the paper combines the measurements obtained here with those advanced in Grinberg (2008; 2013b) to present an approximation to the evolution of the total Brazilian ground-rent during 1955-2005. The appendix presents the sources and methodology used for the estimations.

This paper discusses the attempts to publish a historical-critical edition of the works of Karl Marx, the Marx-Engels Gesamtausgabe (MEGA): the first one, which was led by David Riazanov in the 1920’s and 1930’s, and the second one, the MEGA2 project which begun in the 1970’s and is still in course of publication. The paper presents these two editions and discusses their impact on the interpretation of Marx’s economic and philosophical thought.

The international financial system has undergone deep changes since the 1970s and its stability cannot be reached in spite of actor's interests or the existence of countless coordination fora. Analyzing the system's incentive structure, one can note that its stability depends on the control of imbalances, which are not always harmful for States, creating, thus, a disturbing component in the quest for international financial management. Furthermore, non-state actors have acquired a disproportional share of power following financial globalization, escaping the control of States and of the international community.

A critique to the usual economic indicators of de-industrialization in Brazil. The debate on de-industrialization has gained special prominence in Brazil, but methodological issues concerning the economic indicators used to evaluate this process are rarely discussed. This paper presents a critical evaluation of two common indicators in the Brazilian economic literature: the share of industry in GDP and the ratio VTI/VBPI. While the first measure shows sharp fluctuations due to changes in methodology, the second appears to be very sensitive to exchange rate variations and does not capture the inter-industry differences. Thus, the results show that both indicators contain problems and may lead to misleading conclusions about the national productive structure.

This study enhances the principal–agent model by incorporating a multilevel perspective and differences among agency situations. A theoretical discussion is developed using a proposed intersection of methodological focuses and a descriptive-exemplificative hypothetical analysis. The analysis is applied to public expenditure social control in representative democracies, and as a result, a principal–agent model unfolds that incorporates a decision-making perspective and focuses on formulation, negotiation, articulation, and implementation competencies. Thus, it is possible to incorporate elements into the principal–agent model to make it more permeable to individual, group, and societal idiosyncrasies with respect to public expenditure social control.