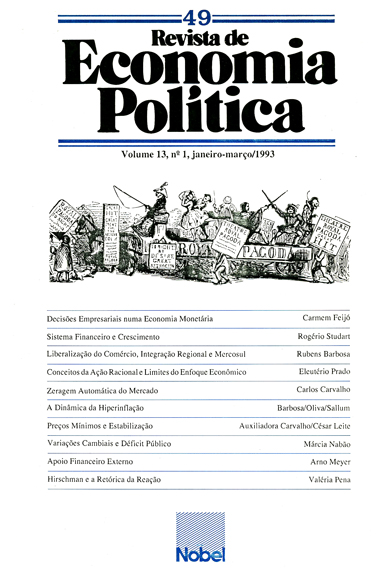 A hyperinflation model is developed where the money and goods markets clear in-stantaneously, expectations are rational and there is inertia in the price system due to wage indexation mechanisms. The model is described by a nonlinear system of differential equations and Hopf bifurcation theorem, regarding the public deficit as a parameter, is used to study the dynamic properties of the system. The dynamics of the model is capable of generating hyperinflation processes, as well as other paths that are commonly observed in high inflation countries.

This article stresses the pertinence of the concepts of indexed money, as well as of excessive liquidity of financial assets, for the analysis of stabilization programs in Brazil. Thc author criticizes the analysis of A. C. Pastore, who stresses the problems associated to the so-called “zeragem automática” (the automatic financing of financial institutions’ overnight positions by the Brazilian Central Bank throughout the eighties). It is argued here that the “run” of investors away from certain financial assets should be understood as increases in the number of transactions rather than merely as a larger demand for cur-rency, since the funds withdrawn return to the banks at once and withdrawals can be made even when undesired by the Central Bank. This article insists on the difficulties brought by combinations of a high amount of quasi-money with fiscal and exchange pressures that are strongly expansionary, including pressures arising from the servicing of the public debt, and suggests that such difficulties may have led the Central Bank to provide automatic financing as mentioned.

The study measures the direct effect of exchange policy on public finances in Brazil in the period 1985-1988. With the aim of measuring exchange policy effects, the change of real exchange rate vis-à-vis the american dollar will be used. The compilation of all public revenues and expenditures, affected by exchange rate changes, as well as their consolidation, was performed. For this purpose, thc public sector balance of payments was drawn from actual data and, in their absence, from estimates. The survey concludes that the relationship between the Brazilian public sector and external sector, governed by the high external indebtedness determines a negative direct impact response of thc public sector fiscal deficit to a real depreciation of the foreign ex-change rate.

This work analyses the minimum price policy in Brazil. Some measures of price spread are performed in monthly prices time-series to estimate the impact of the policy on the series of rice and com. The results suggest that changes in thc price policy would not modify thc historica1 performance of the price time-series for these crops, except the case of the intervention prices that has worked since 1988.

This paper takes an evolutionary and systemic approach on the question of regional integration in Latin America, reviewing the main instruments of preferential trade in the region, from the experience of Laia (Latin American Integration, Aladi) to the Southern Com-mon Market (Mercosul), and its intermediate stage, the Argentina-Brazil integration program. Special attention is given to the position of Brazil, being the main partner in the intrarregional trade of Aladi member countries as well as the key country for the success of Mercosul, the most recent experiment in the Latin American integration process. Aladi’s preferential trade arrangements were deeply affected by their economic crises of the 80’s, which touched practically all of its member countries and thus reducing the intrarregional trade flows and the trade creation virtues of its main multilateral mechanism, the Regional Tariff Preference (PTR). By the middle of the 80’s, Brazil and Argentina had already decided to launch a new, bilateral, integration process, which expanded and encompassed the sectorial agreements subscribed under the Aladi framework. After agreeing upon the institutional procedures for the bilateral integration process, the two countries negotiated and concluded an Economic Complementation Agreement (ACE) with be-came the basis for the Assunción Treaty, signed in March 1991 with the adhesion of Paraguay and Uruguay. The new subregional integration experiment takes place in the middle of trade liberali-zation processes and the dismantling of import substitution policies in the four countries.

Financial liberalization models have been for the last nineteen years the foundation of mainstream thinking on the role of financial markets and institutions in economic development and the basis for policy-making in many LDCs.
This paper presents a critical appraisal of the financial liberalization literature and points to a alternative view based on Post Keynesian theory. That alternative view is bas-ed on three aspects of monetary economics. First savings does not provide finance: the role of savings is not related to the financing of capital accumulation, but to its funding. Second, capital accumulation increases banks’ fragility, which can be alleviated through funding. Finally, how we model the finance-investment-saving-funding circuit depends on institutions and conventions, which are evolving.

This paper presents the four concepts of rational action, that Habermas find himself revising social science literature. They are: teleological, normative, dramaturgy and com-municative action. It. shows, after this, how these concepts can be employed to situate analytically action notions used in Political Economy. It shows too, next, how these con-cepts can help to find the limits of economic approach. It is criticized, finally, the economic imperialism that is shown to express the expansionism of instrumental reason.