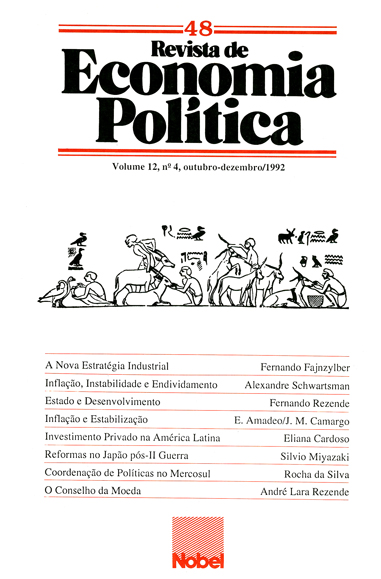 In this paper the author offers an alternative development strategy to the previous import substitution, inner oriented, state led one, but also to the “new orthodoxy of the 1980s” — the neoliberal approach. This alternative is based on the experience of European countries and particularly of the Asian Tigers, that he calls GEICs (Growth with Equity Industrializing Countries). These countries were able to develop combi-ning high rates of growth with a reasonable distribution of income. This “mail box” is void in Latin America. If we build a two entry matrix having in the lines the growth rate (low or high) and in the colons, the degree of equity (bad or reasonable), and we plot the Latin American countries in this matrix, the box “high rate of growth — reasonable degree of equity” will be void. If Latin America is able to fill this box, savings will increase, technical progress will be accelerated, growth will be resumed.

We provide here a model that attempts to explain how the financial circuit in Brazil became an outstanding locus of wealth valuation. It shows that its special character is due to a peculiar institutional arrangement that allows the public sector — the main financial agent — to operate with negative spread. Then, inflationary shocks can produce very strong movements of private sector portfolio, between indexed and non-indexed bonds, which can deepen the negative spread. This is the reason why the financial circuit is a source of wealth valuation, since this negative spread is appropri-ated by the financial speculators.

This article discusses the Cepal’s approach on the role of foreign capital in the industrialization of the Latin America during the fifties. The first section provides a synthesis of Cepal’s vision on the structural changes in the main Latin American economies. The second section shows how the international capital was understood by “cepalinos” thinkers as an alternative way of financing development, in opposition to the radical schemes that were proposed by the nationalists and the left. The concluding section summarizes the main points of the paper.

Up to now the claim for deep institutional reforms in the Brazilian economy did not lead to major changes. The consensus on broad issues, such as less government interference and control, has proved not to be sufficient to give more impetus to these reforms over the nineties. It is intended to summarize some basic questions, which might help to further appraisal of the chances to solve the conflicts of interest in due times. The divergences, in many cases, are more a matter of time and degree than of substance. For that matter, it is pointed out that a previous agreement on some basic principles, alongside the propositions advanced by Italian writer Ítalo Calvino for the next millennium, will be of great help.

This paper develops a model in which the distributive conflict between capital and labor is the driving force, which generates inflationary pressures in a market economy. In the model the rate of inflation is a function of the capacity of firms to pass increases in costs to prices and of the relative power of workers and employees associations in the process of collective bargaining. One of the main results of this analytical framework is that the structure of the capital/labor relations in a country, the process of collective bargaining and the structure of unions organizations are important determinants of inflationary pressures. As a result, institutional reforms which promote cooperation on capital/labor relations are of great importance in stabilization policies, if the social costs of stabilization are to be minimized.

This paper analyses the Japanese inflationary process occurred in the period after the World War II, between 1945-1950, its causes and the policies of stabilization, monetary and fiscal reforms. Initially, it analyses the factories that increased the price level. The measures adopted to revert this process were divided into two subperiods: phase 1 (between 1946-1948) and phase 2 (between 1949-1951). Those economic policies and reforms resulted in an economic stabilization.