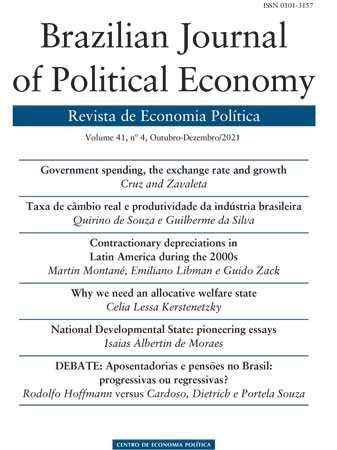 The objective of this work is to analyze the relationship between the real
exchange rate and the productivity of the industry in the short and long terms. In order
to test the new-developmental hypothesis that a higher level of the real exchange rate is
related to a greater dynamism in the productivity of the industry, a mathematical model
of this theoretical relationship is developed and an econometrically estimated Non-Linear
Autoregressive Distributed Lag Model (NARDL). The results found are unprecedented, since they demonstrate the existence of a positive relationship between a real devaluation of the
effective exchange rate and the growth in labor productivity of Brazilian industry in the
long run. In addition, the work was able to demonstrate an existing asymmetry of the effect
of (de) valuation on productivity, that is, the estimates showed that devaluation positively
affects the productivity of Brazilian industry when compared to the negative effects of an
appreciation on productivity.

This paper seeks to contribute to the advancement of studies on the National
State and economic development. For that, I used an original and singular transdisciplinary
approach based on Pierre Bourdieu’s sociological theory and economic history. The
methodological procedures were bibliographic research of historical and inductive analysis
of the economy. The results obtained were that, for the construction of a National
Developmental State, society, first, needs to establish meta-capital and meta-field immersed
in the developmental precepts and concentrators of soft power and hard power to,
subsequently, execute the project of expansion, integration and sophistication of the
productive structure.

Users of Brazilian National Accounts often use the overestimated sectoral share
due to the financial dummy not being eliminated from sectoral GDP. This affects the level,
peak, and shape of the deindustrialization series. Changes in the National Accounts system
have also caused structural breaks in time series, making it difficult to assess the effect of
trade opening on deindustrialization. This study created series of sectoral shares in GDP
from 1947 to 2019 to circumvent the financial dummy and discontinuities in the longterm
series. The new series is more adherent to economic cycles, captures the effect of trade
opening, and contests the over-industrialization thesis, allowing a better understanding of
the deindustrialization process.

This paper explores the effects of currency depreciations on output for the main
Latin American countries that have been using Inflation Targeting for almost two decades.
We construct VAR models for Brazil, Chile, Colombia, Mexico and Peru for the last two
decades and we find that depreciations have short-run contractionary effects in Brazil and
Mexico. We illustrate some of the policy implications of that finding by building a simple
model, and we show that contractionary effects of depreciations may have destabilizing
effects when monetary policy is conducted using a standard Taylor Rule.

In this essay, I propose an agenda for the welfare state of the 21st century that
emphasizes its role as a mechanism of resource allocation. Since social and environmental
problems are getting out of hand, the time for mere compensation is over: we need a
mechanism for directly influencing systems of production and patterns of consumption in
the direction of addressing those problems. This partially translates into a decisive sectoral
shift towards public social services led by the welfare state. Among the advantages of this
move, in addition to more socially balanced outcomes, are quality jobs and fulfillment of
social needs in an environment-friendly way. The allocative task which gives the welfare state a constitutive role in shaping the socioeconomy complements its classic function as problem
fixer. The allocative welfare state must be prepared to limit the domain of market allocation.

The geographical distribution of Brazilian industries changed between 2002 and
2014, and it was more significant for some industries. Based on Dumais et al. (2002), we
explore the dynamics of these changes by a decomposition of the employment variation and
concentration index for manufacturing industries grouped by technological intensity, and we identify the direction of the locational movements of the firms among microregions. In general., the results indicate that between 2002 and 2014, there was a trend of convergence
among the microregions’ participation in industrial employment, contributing to industrial
deconcentration in the country, with the exception of the group of high-technology industries,
which became more concentrated. Components of the life cycle of industries, especially the
growth of employment generated by new industries in non-metropolitan microregions, are
identified as main propelling of this evidence. In general., the results are consistent with the
importance of agglomeration economies over historic accidents to explain the industrial
concentration in Brazil between 2002 and 2014.

An assessment of the debates over income distribution and growth in the Neo-Kaleckian literature
Sulafa Nofal
Brazilian Journal of Political Economy
https://doi.org/10.1590/0101-31572021-3165
View Article

Kaleckian literature is considered an important theme in the post-Keynesian
school of economic thought. In the aftermath of the financial crisis, the endeavors of
forming a new consensus regarding essential economic issues, in particular achieving
economic growth became a need. Thus, the Kaleckian models returned to be in the spot
since these models tackle the impact of changes in the distribution of income and address
the question whether a redistribution of income away from wages and towards profits is
capable of boosting growth. In this sense, this paper return to Kaleckian insights and offers
a theoretical discussion of the distributional effects on aggregate demand and economic
growth. Moreover, through the lens of neo-Kaleckian tradition, the evolution of the debate
on wage-led and profit-led regimes in recent decades can be traced.

The reswitching of techniques and its epistemological implications: a deepening of criticism
Alain Herscovici
Brazilian Journal of Political Economy
https://doi.org/10.1590/0101-31572021-3156
View Article

This paper aims (a) to explain the mechanisms from which the problem of
reswitching of techniques is formulated and (b) to analyze the implications with regard to
the general architecture of neoclassical macroeconomics. I will show how these elements
allow refuting the neoclassical theory of income distribution, and why they translate into
structural instability. In the first part, I will explain the mechanisms that correspond to
the problem of reswitching of techniques; in the second part, I will study the implications
linked to the reswitching, with regard to the determinants of income distribution and the
equilibrium stability.

This article analyzes two texts by Sraffa published in 1925 and 1926 with
criticisms of the dominant marginalist approach, which presupposes free competition and
diminishing returns. Sraffa concluded that such a model only applies in the case of constant
returns. These two articles served as a basis for Sraffa, almost 30 years later, to formulate
a devastating critic of the marginalist or subjective theory of value by proposing a model
of prices and income distribution that does not depend on the hypothesis of changes in the
scale of production or in the proportion of factors.

These comments are a reaction to the article by Cardoso, Dietrich and Souza
(2021) published in the Brazilian Journal of Political Economy, vol. 41 (1), January-March
2021.

This is a reply to the criticisms raised by Professor Rodolfo Hoffmann to our
article “Population aging and inequality”.