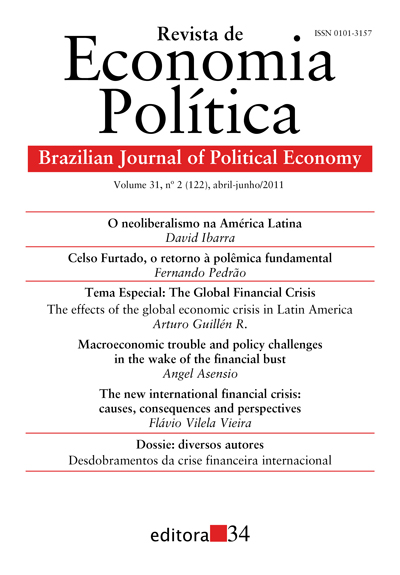 The aim of this article is to analyze the current phase of the global crisis and the way it has manifested itself in Latin America. The global crisis is the most important capitalist crisis since World War II. It is a new type of debt-deflation crisis, highlighting the limits of the finance-dominated regime of accumulation and characterized by securitization. Latin American countries have not been immune to the global crisis. Since it sets limits on globalization, the impossibility of maintaining export-driven accumulation sustained by restrictive monetary and fiscal policies becomes clear. This time, there will be no way out in external markets for any country. That fact will force them to restructure productive systems and search for a way out in domestic markets and in regional spaces for integration.

Contrasting with the 1929 great crisis, authorities intervened forcefully in 2008 to stop the disintegration of the financial system. Governments and central banks then sought to revise the prudential regulation in depth. It would be optimistic, however, to believe that prudential measures, alone, could deliver full economic recovery, at least in the countries that had been involved in the financial turmoil. Indeed, the collapse of the 'state of confidence' and the negative effects of private debts on consumption and investment decisions have fed depressive forces and policy challenges which could hold for a while, even once the financial sector is made safe. On the one hand, the economic slowdown and the direct and indirect assistance provided by the governments to the private sectors are having a heavy impact on public finances, meanwhile, on the other hand, the massive amounts of money which artificially inflated the prices of housing and financial products could produce inflationary pressures in the post-crisis period, unless a new assets bubble is allowed for. Authorities could therefore be facing high unemployment in a damaged context of public deficits and inflationary pressures. The paper aims at discussing these new challenges. The inadequacy of inflation targets and fiscal orthodoxy in a depressed economy is emphasized, and the outlines of a Post Keynesian alternative policy are examined.

The paper investigates the recent financial crisis within a historical and comparative perspective having in mind that it is ultimately a confidence crisis, initially associated to a chain of high risk loans and financial innovations that spread thorough the international system culminating with impressive wealth losses. The financial market will eventually recover from the crisis but the outcome should be followed by a different and more disciplined set of international institutions. There will be a change on how we perceive the widespread liberal argument that the market is always efficient, or at least, more efficient than any State intervention, overcoming the false perception that the State is in opposition to the market. A deep financial crisis brings out a period of wealth losses and an adjustment process characterized by price corrections (commodities and equity price deflation) and real effects (recession and lower employment), and a period of turbulences and end of illusions is in place.

Neoliberalism in Latin America. Neoliberalism and globalization had decisive influence in shaping public policies both internal and foreign in Latin-America. Less state, trade and market freedoms, social goals subordinated to economic criteria, are part and parcel of the neoliberal utopia. Price stability was erected as the main social objective; import substitution resulted replaced by exports as the main source of growth. The neoliberal net results as applied to Latin-America are: less growth, deindustrialization, income concentration and precarious employments. Therefore, countries public policies should try to gain autonomy to use jointly markets and public intervention in a constructive and innovative fashion.

A reading of the work of Celso Furtado in its completion opens an enriching view of the interaction between theoretical thinking and the unveiling of Latin-America history. Starting from an appraisal of the pre-Classic and Classic authors, Furtado outlined an approach of surplus theory. That would enable development theory to deal with the unevenly industrialized economies like Brazil. His thorough analysis of development and underdevelopment processes broke away from the initial ECLA experiences to build a planning proposal the uprising country. The French roots of his academic profile helped him to keep an orderly explanation of capital demand that kept him siding with Wicksell against the subjective theory of Schumpeter.

This paper aims at presenting and discussing some of behavioral models developed by Economic Psychology which is considered an irrelevant field of research for many economists yet. On highlighting the multidisciplinary convergence notably from economists’ interests by psychology, it is done emphasis to the discussion of the role played by methodological individualism in the psychological reduction of the homo economicus. Such a reduction has, on the one hand, made harder the conciliation between the individual and the collective level of analysis. On the other hand, it made closer economists and psychologists in the common interest of developing methods capable of understanding the economic behavior under a perspective which allows the integration of the complexity of collective dimension in which the individual makes part.

How much racial inequality is there in Brazilian labor market? What has been the impact of the latest transformations in work relations on it? Can we compare the Brazilian situation to other countries? These questions don't have today an objective answer. This is due, mostly, to the absence of measures which could allow us to make long term and regional comparisons of different racial inequalities situations. Our proposal is to provide new indicators to evaluate racial inequalities in both the occupational and income structure in Brazil. Our results show that whites/non-whites gaps widened since the 1980's. They allow us to affirm, in addition, that racial inequalities are today worst in Brazil than in countries that adopted affirmative action laws to fight discrimination.

The new Keynesian-struturalist school of thought is formed by a Structuralist Development Macroeconomics that offers scientific explanation to New Developmentalism – a national development strategy. In this intervention the author delineates its main theoretical claims and policies.