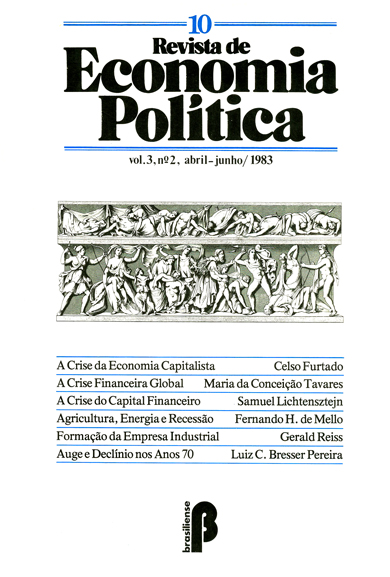 The rapid integration of national markets after the Second World War gave rise to a complex global system, yet it is a system, which lacks a unified institu-tional framework. The asymmetrical nature of the process of market integration, the excessive degree of openness of many national economies and the behavior of the Japanese economy are three main factors behind the tensions in the current economic picture. The weakening of the nation state as a coordinating instrument for economic activity is to a large degree responsible for the present cacophony of the economic system. On the other hand, we see no clear indica-tion that the corporations involved in the transnationalization of the economy are capable of creating the institutional framework necessary for the coordi-nation of economic activity.

The article begins with an analysis of the current financial crisis, emphasiz-ing three basic components: loans taken out by large productive enterprises in the national and international credit market; short term loans taken by all the Third World countries as well as the majority of European countries in the Soviet sphere: and finally the fact that every country shows larger fiscal deficits of an increasingly endogenous nature. It also analyzes the responsibility of North american economic policy in the crisis. It questions the optimistic perspectives in relation to thc international credit market and points out the necessity for a coordinated financial solution which would give a new form to the assets and liabilities of the principal banks and large transnational enter-prises, as well as setting the stage for the renegotiation of the foreign debt in the case of the most vulnerable national economies.

The classical concept of financial crisis is compared to the characteristics of the present crisis, pointing out its different aspects. The analysis focuses on the foreign debt and the conditions for its continuity, the link between the direction of the crisis and domestic policy and the international financial situa-tion and its own crisis. In terms of Latin America, after analyzing the specific characteristics of some of the most important national economies, the possibili-ties and advantages of a joint renegotiation of the debt are discussed. This is an alternative, which calls for a certain degree of audacity, which in fact corresponds to the audacity of international finance capital in its response to eventual crisis.

This paper reviewed Brazilian agriculture in the context of a greater - priority” for the production of food, exportables and energetic crops, as well as the economic recession from 1981 on. We indicated that the recession had a fundamental role in decreasing food demand at the same time that contributed to a strong decline in real prices. This seems to be important in terms of production targets for energetic crops, of exchange and commercial policies and of a possible recovery of the world economy. In addition, the negative effects of the expansion of energetic crops over food production constitute one of distributive problems of the Brazilian energy program.

This article analyses the conditions under which the growth of industrial enterprises occurred in Brazil before the 1930’s. Emphasis is placed on the specific nature of capitalist risk in industrial en-terprise, in an economy dominated by accumulation of coffee capital. Industrial competition and growth strategies of individual industrial firms are discussed together with a typology of industrial firms that emerged during this period. Finally, the origin and growth of a major Brazilian firm is presented as an illustration of what is called the large “industrial emporium”, a peculiar form of commercial capital engaged in industry.

Analysis of the Brazilian economy between 1970 and 1982, focusing on its cyclical nature. After a short analysis of the economy ‘s expansion up to 1974, the author discusses alternative theories for the reversion of the cycle. With the subsequent slowdown of economic growth we have inflation and an explosive increase in the foreign debt. Finally the article analyses the 1981-1982 recession, and the underlying distributive crisis.