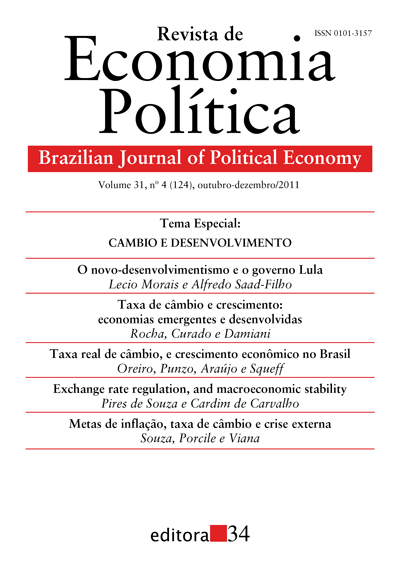 This article critically reviews the design of neo-developmentalist economic policies in Brazil, in the first half of the last decade, and their relationship with the economic policies of the Lula administration after 2006. Paradoxically, the neo-developmentalist policies were implemented jointly with the main (neoliberal) macroeconomic policies which had been introduced earlier. The article reviews the relevant literature, and examines the contradictory nature of this ‘inflection’ of economic policy. So far, this combination of policies has achieved an unquestionable – though provisional – success, despite the persistence of the structural macroeconomic problems due to the continuity of the neoliberal policies.

In this article we argue that the Brazilian economy presented in the period 1994-2007 a tendency of real exchange rate appreciation with respect to its equilibrium value, mainly from 2005. This exchange rate misalignment has worked to reduce the growth of Brazilian economy and is the root of the re-emergence of current account deficits.

In the last two decades an entirely new set of rules governing the foreign exchange transactions was established in Brazil, substituting for the framework inherited from the 1930’s. Foreign exchange controls were dismantled and a floating exchange rate regime replaced different forms of peg. In this paper we argue that although successful by comparison to previous experiences, the current arrangement has important flaws that should be addressed. We discuss how it first led to high volatility and extremely high interest rates, which, when overcome, gave way to a long lasting appreciation of the real exchange rate with adverse consequences to industry.

Which role should the real exchange rate play in an inflation target regime? In this paper this point is discussed from the point of view of the conditions required for avoiding an external crisis. With this objective, a dynamic Kaleckian model is presented focusing on the stability of the external debt to capital ratio. The main conclusion is that policy makers should monitor closely the evolution of the real exchange rate in order to make compatible the inflation target regime with external stability.

Diversification or specialization an analysis of the process of structure change of the Brazilian industry
Laura Carvalho, David Kupfer
Brazilian Journal of Political Economy
View Article

Based on findings of Imbs and Wacziarg (2003), whose empirical study established the existence of a U-shaped pattern of the evolution of sectoral concentration in relation to per capita income, this paper aimed at determining the path of structural change followed by the Brazilian industry in the last decades and at comparing it to the pattern found by the authors and to the path followed by ed countries. The empirical work has verified that the stage of diversification of the Brazilian industrial structure has ended in lower levels of per capita income than in the studied countries.

The article aims to demonstrate how the Harrod’s approach (1937, 1938, 1948) can offer theoretical elements to form a complex, historicists and non-determinist view of the economic system. The relaxation of the constant warranty rate hypothesis make possible the system suffers endogenous qualitative change. It results in the notion of path-dependence and historic time. By the endogenization of the expectations and the existence of turn-points mechanisms, this approach allows a synthesis between non-convergency and economic regulation.

Increasingly, judges and the courts appear as actors capable of affecting the trajectory of the government decisions, as strategic agents in the policy process. This paper presents an analytical model able to clearly and objectively measure the impact of judicial review in the design of policies in the sphere of economic regulation. Underlying the model is the concept of transaction costs, through which one can raise the levels of intervention of the judiciary in regulatory policy. In addition to the analytical model, the article demonstrates that the interaction between the heterogeneity of preferences in the courts and institutional mechanisms of the justice system is capable of generating greater coordination and cooperation than expected.