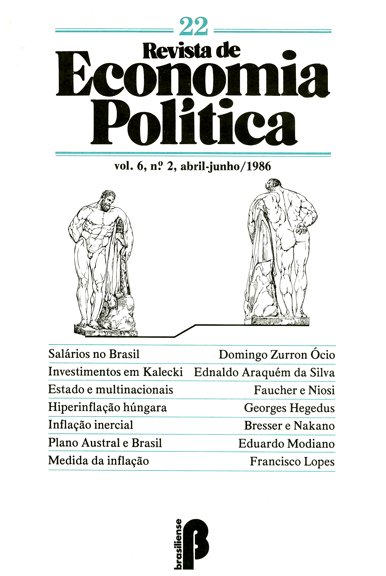 Using an alternative data, we built a General Wage Index for the industry of transformation, between 1961 and 1984. Its desegregation permitted us to analyse the evolution of real salaries and real wages of the eight professional categories. We verified that the earnings depend, in the first place, on the conduct of the economic cycle, and secondarily, on the factors related to the business’ organizational structure, trade-union movement and government’s wage policy. The official minimum wage doesn’t seem to determine the wages rate; its major impact concerns to informal sector.

Though published in the early 1930’s, and despite recent interest in his theory, Kalecki’s investment model has not been subject to much empirical testing. This paper specifies a three equation short run version of Kalecki’s investment model and estimates it using annual U.S. data between 1948-1980. A surprising result is that U.S. economy appears to have been dynamically unstable in the period analyzed, with cycles of increasing amplitude.

This paper provides a description of the Hungarian hyperinflation in the period immediately after Word War II. It is shown that the inflationary process started with the necessity of financing the high costs of the war effort. After the war the reduction of production capacity, reparation payments and the large government deficit provided the factors for rapid growth of the rate of inflation. Reference is made to the unsuccessful effort to introduce an indexed currency. The stabilization process is seen as a result of careful planning and a very harsh redistribution of inco-me among the various social classes.

The application of the so-called “heterodox shock” anti-inflation policy in Argentina provoked several discussions about the similarities and differences between Brazilian and argentine inflation, and the possibility of its application in Brazil. This article attempts to examine some of these questions. The analysis emphasizes the question of the lags in the readjustment of the prices and the contribution of the conversion of prices to the average values of the period for the stability of the new currency; the question of the synchronization of wages and prices increases; and the utilization of conversion tables. Finally, the rate of interests and its relation with the level of economic activity.