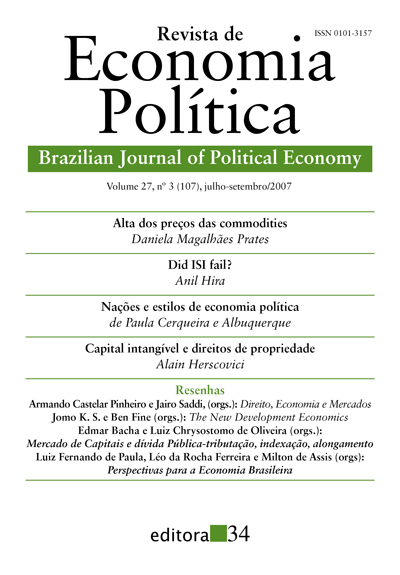 This article suggests some explanations for the steady rise of the commodities prices since 2002. Firstly, it analyses the long and medium term trends of these price. Secondly, it explores the determinants of the recent rise which are the macroeconomic conditions of the international economic, the high growth rate of China and supply shocks that affect the production of some agriculture commodities.

Did ISI fail and is neoliberalism the answer for Latin America? Re-assessing common wisdom regarding economic policies in the region
Anil Hira
Brazilian Journal of Political Economy
View Article

The second phase of Import Substituting Industrialization, commonly known as ISI2, involved the move in Latin America to “heavy” industrialization, from around 1950-80. This period of economic history has been reviled on both the Left and the Right as being one of either heightened dependency or one demonstrating the clear failure of state intervention in the economy. In this research note, I use a basic statistical analysis to back up other descriptive claims that the ISI2 period was rather one of mixed success, with macroeconomic volatility accompanying great progress in GDP and manufacturing growth. In a sense, the ISI2 period succeeded in industrializing the large economies of the period, and contrasts favorably with the record of the succeeding paradigm of neoliberalism. This research note seeks to raise questions about the way we look at the historical period of ISI2, and suggests that a more open-minded perspective could lead to a more effective and sustainable political economy paradigm for the region in the future.

This paper investigates the existence of national styles of political economy. The characteristics and determinants of the German, the Austrian, the French, and the English styles are suggested. Some methodological implications for the history economic thought are outlined.

The attitudes towards gender and homosexuality tend to be linked at the micro level (individuals), which explains the political saliency of this newly emerging cleavage. At the macro level (country), the main finding is that the value orientations towards gender and homosexuality are strongly embedded in the basic cultural or civilisation differences among countries. As developing countries modernise and enter post-modernity, they will also experience the gender cleavage, especially when they adhere to an individualistic culture. Cultural cleavages in the post-modern society, whether in rich or developing countries, can only be properly researched by the survey method. It opens up a large area for both micro and macro analyses in the social sciences.

This paper deals with the main evolutions that explain the emergence of new institutional arrangements that characterize the post-fordism. (i) Hence, I will show that the property rights modifications bring forth new forms of competition. (ii) Also, I will make explicit the concrete expressions of this new competition as well as how it translates itself in a sub-optimum allocation in the framework of the market game (iii) I will study the modifications of externalities nature produced by technical progress. (iv) Finally, I will analyze the macroeconomic implications in regard to growth mechanisms and to capital nature.

This article critically resumes Ricardo’s principle of comparative advantages pointing out internal coherence problems that have been neglected by the specialized literature. First, long-lasting disequilibria observed in the balance of trade seem incompatible with the idea that these disequilibria are caused by technical advances that change relative prices. Second, comparative advantages do not seem to work in an economy with a universally accepted commodity-money. Finally, the contradiction between the gold standard mechanisms, ruled by Smith’s “Law of Reflux”, and the quantitative theory of money, which is a necessary condition for the “second way” of the theory of comparative advantages.

After surpassed more than a half decade since the adoption of inflation targeting in Brazil, it can be seen that maintaining a high interest rate is inherent to the strategy for the conduction of the monetary policy. The objective of this paper is to show that the present policy for defining the basic interest rate of the economy, based on the response to inflation considering both market prices and administered prices, is onerous for the Brazilian society. Based on findings from empirical evidence in the period 1999-2004, the adoption of a core inflation, a change in the time horizon for definition of targets, and, in common agreement between Banco Central do Brasil and National Treasury a definition of these inflation targets, as a framework to increase efficiency of the monetary regime creating possibilities for reducing the Selic rate is proposed.

The growth of contingent of pluriactive farm families (pluriactivity) has increasingly been accepted as important in reducing rural poverty and unemployment since at least two decades in the EU and very recently in Brazil. This paper supports that, differently from the EU, in the South Brazil, region of modern capitalist agriculture, it is hard to the pluriactivity to grow through the years, and so that it can increase the public policies must be led mainly to avoid the exclusion of the small farms, their gradual abandonment of the traditional agricultural activities, and not only to offer them non agricultural occupations.

The subnational debt in Brazil was marked by successive bailouts by the federal government. The path of subnational debt induced some locals and state authorities to claim for further renegotiations. More specifically, some governors and mayors demanded a revision of the refinancing contracts. This article intends to present arguments sustained by simulations of the evolution of the path of the subnational debt, denying the necessity of changes in legal framework which rules the state debt. The first section consists of a brief overview. The following section treats of the institutional framework designed to safeguard the fiscal intertemporal balance. In the third section, the implications of new institutional framework on the subnational debt are approached; in the fourth, the possible causes that distorted the expected path of the debt are discussed. The fifth section analyzes the future perspectives for the debt in general terms and focuses some specific cases, while the sixth section discusses the problem under a federal optics. Finally, the conclusion is presented.