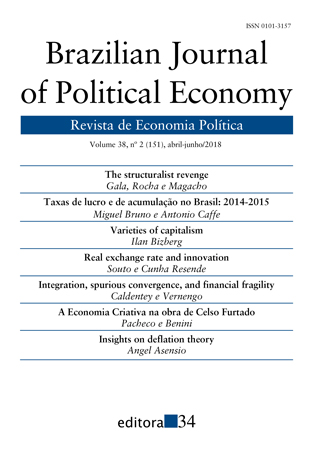 This paper brings elements from the economic complexity literature to the discussions of the structuralist tradition on the central role of manufacturing and productive sophistication to economic growth. Using data provided by the Atlas of Economic Complexity this study sought to verify if countries’ complexity is important to explain convergence and divergence among poor and rich countries and, if so, which are the countries that will be able to reduce the income gap compared to developed countries. The econometric analysis revealed that exports and production complexity is significant to explain convergence and divergence among countries.

The trends in profit and accumulation rates are key indicators in the analysis of economic crises. These variables account for the trajectories of economic growth and they are conditioned by the functional distribution of income. The deterioration of the macroeconomic conjuncture from 2014, in Brazil, has often been attributed, by mainstream analysis, to the errors inherent in the so-called "new matrix of economic policy”. However, the analysis of profit and accumulation rates, immediately after the impact of the US crisis in Brazil, in 2009, shows the existence of structural factors that are characteristic of the current Brazilian economy, which could not be overcome by countercyclical fiscal and monetary policies.

Both Latin America and Asia observed an impressive growth of their economies from the turn of the century until 2013. One of the differences between Asia and Latin America is that while redistribution and social security increased significantly in the second and growth was accompanied by reduced inequality, in Asia we have seen the contrary, increasing inequality, a more inefficient and decreasing social protection and no intent to redistribute. This paper wants to answer in what respects the mode of development of Asia, as characterized mainly by China, is more sustainable than the one followed by Latin America.

The Spanish Crisis is generally portrayed as resulting from excessive spending by households associated to a housing bubble and/or an excessive welfare spending beyond the economic possibilities of the country. We put forward a different hypothesis. We argue that the Spanish crisis resulted, in the main, from a widening deficit position in the non-financial corporate sector and a declining trend in profitability under a regime of financial liberalization and loose and unregulated lending practices.

In almost all of his production, the noted economist and former minister of culture, Celso Furtado, praised the creativity of the nation as a strategic asset for the emergence of a new sustainable, inclusive and endogenous economic development model. The analytical trajectory of this work turned to literature review to highlight the theoretical contributions of Celso Furtado about the potential arising of a new economy that is intensive in creativity. In turn, the clipping of Celso Furtado's thought is a powerful and current tool to (re)consider the overcoming strategies of the country's underdevelopment.

Irving Fisher offered a ‘tentative’ debt-deflation theory of great depressions rather than a fully consistent theory of his ‘creed’: “I say "creed" because, for brevity, it is purposely expressed dogmatically and without proof. (…) it is quite tentative” (Fisher 1933, p 337). The paper argues that prominent authors who strived to explain his ideas within the Walrasian apparatus could not deliver a consistent theory of deflation with protracted depression. This is basically because destabilizing market forces cannot dominate in that conceptual framework. By contrast, owing to the way competitive forces operate under fundamental uncertainty, Keynes’s General Theory escapes the contradiction.

During Substitution Industrialization (1930-1975), wages rose, and unemployment and poverty were low. During the "neoliberal process" (1976-2002) the liberalization of the goods and financial markets resulted in the regression of the productive structure, high unemployment and the decline of real wages. Finally, since the collapse of 2002, Argentina has had enormous success in terms of unemployment, with limited achievements in wages or poverty. This paper tries to answer why Argentina faces difficulties to return to past labor market figures highlighting the process of capital differentiation and the new international division of labor.

Historically, investments in innovation for military purposes have been presented as having a positive impact on economy development as whole. In this vein, the end of the Cold War is presented as an inflection point. The reduction in the number of international conflicts would have negatively affected investments in defense-related products, as the former was considered the driver of the latter. It argues that the decision of whether investing in the military or the civil sectors as the driver of economic development depends first and foremost on historic and socio-economic contexts in which decisions are taken.