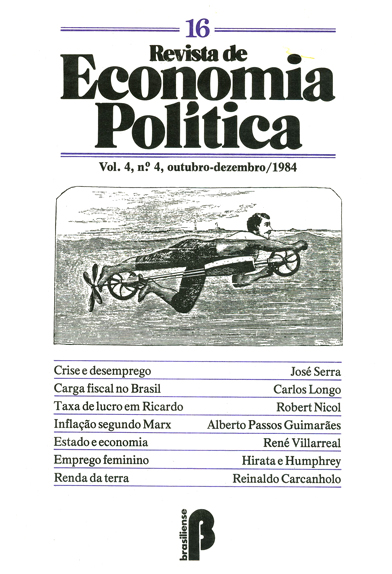 In its first part this paper presents a detailed description of the main characteristics of the actual Brazilian economic crisis, focusing its effects on the industrial output, on investment and employment. Afterwards the unemployment question is analyzed in detail, including the discussion of various types of existing unemployment, the way through which they develop in Brazil, the aggravation of unemployment problem from 1981, and finally the author presents the prospects for the next years. José Serra concludes finally that there are a necessity of a deep change in the economic policy and shows the principal aspects of an economic strategy that will favour the reduction of unemployment levels.

It is not the prices that vary in accordance with the amount of money in circulation; it is rather the amount of money in circulation that varies in accordance with the variation of the sum of prices. It is not the risting of the earnings that causes the rising of the prices. On the contrary, it is the rising of the prices, producing deprecations in the currency that provokes in consequence losses of the earnings’ acquisitive power. When increases of the sum of prices occur, whatever their origins, we will have one of the following inevitable consequences: on the one hand, the same quantity of commodities is then exchanged by a larger amount of money; on the other hand, the same amount of money then buys a smaller quantity of commodities. This happens in the internal trading relations as well as in the international trading relations of each country. In both cases, the main fact to point out is the reduction of the money’s acquisitive power. This reduction can be produced eighter spontaneously, by the action of the forces of the market, or as a result — as in the case of the alterations of the rate of exchange — of the intervention of the Government authority. Therefore, according to Marx, contrary to the different theories supported by the “vulgar economy”, the inflationary phenomenon begins with the currency depre-ciation, of which are consequences or subsequences, the price increases and the reduc-tion of the earnings’ acquisitive power. The Brazilian inflation in the ‘70s and ‘80s was seriously aggravated by the world’s cyclical crisis, by the capital’s overproduction in the rich countries, by imports of surplus capital through banking loans, and by the monetary anarchy which displac-ed the investments of the productive sectors, deviating them to the non-productive sectors.

The author analyses Ricardo’s proposition that for a one-commodity economy (a com producing economy) in the presence of a growing population and decreasing returns in agriculture there would be a tendency for the rate of profits to fall. After showing that for a one commodity economy Ricardo’s proposition and the demonstration he provided for his proposition are both correct, the author analyses what would happen in a two sector economy, that is, an economy with a stagnant agriculture and an indus-trial (or, perhaps, a commercial) sector subject to technological progress. With the aid of a Sraffa type of model it is shown that Ricardo’s proposition is correct even in this case, that is, in a closed economy where agriculture is not subject to technological progress, even if the economy has other sectors where there are gains in productivity, a growing population leads to a fall in the rate of profits and eventually to stagnation in the economy.

This paper presents the discussion of the State intervention in the economy, regis-tering the present conceptions of economic thoughts. The view of the role of State in the different economic doctrines: the classic doctrine, the marxist doctrine, the keynesian doctrine, the structuralism of CEPAL (Economic Mission to Latin American) doctrine and the liberal monetarist doctrine is discussed. Then, he concludes that the contemporary crisis claims the appearing of a new paradigm that will have to develop itself through the neo-structuralism, post-Keynesianism and economic policy synthesis, in order to constitute a true scientific revolution.

Female industrial employment grew rapidly in the nineteen seventies, but the sexual division of labour remained very strong. This raises the possibility of women’s employment not being disproportionately reduced as a result of the economic crisis in the nineteen eighties. A study of a large electrical factory in São Paulo revealed that management had clearly discriminatory criteria for ion of workers to be dismissed, but in the absence of a change in the sexual division of labour, the reduction of women ‘s share of employment in the factory was merely short-term and cyclical. However, the labour force was restructured in other ways during the initial crisis period, 1981.

The agro-exporting sector’s capacity to transfer value to the industrial sector, especially during the initial expansive phase, has normally been attributed to its power to generate differential rent. However, at the abstraction level at which it is treated, the problem has not been resolved. This paper attempts to develop a theory of land rent at a specific concreteness level, which will permit its adequate use. After refining the concept of differential rent, the suppositions of the non-existence of pre-capitalist forms and national frontiers are abandoned. With this, new categories are discovered: general differential rent, national differential rent, absolute national monopoly rent.