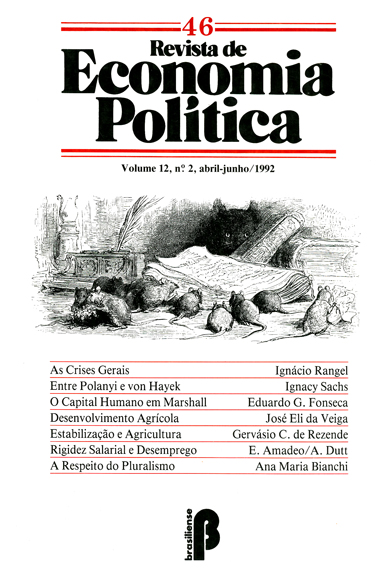 It is helpful to recall the crises our planet presently undergoes, with its affecting eco-nomy and social structure, is not the first of its kind. Its overcoming shall surely request dif-ferent actions of those developed right after World War 1 and Russian Revolution, although one would not be inexpedient to search analogies between “that” Global Crises and “this” one.

In this paper the author discusses the dynamics of the international monetary regimes. In opposition to mainstream economics, these regimes are seen as irreversible historical insti-tutions characterized by a structural instability. They are defined by the degree of exchange rate rigidity, by the mobility of capitals, and by weight of internal objectives in the preference function of governments. Their dynamics is based on an irreversible sequence defined by the increasing degradation of macroeconomic adjustments, leading to the accumulation of ten-sions and to a structural instability, as the world economy changes, and finally to questioning the founding principles of the international monetary regime.

How to account for the wide and persistent differentials in per capita productivity in the world economy? From a Marshallian perspective, these differences are related to microeco-nomic factors (e.g. organization) and in particular to per capita investment in human beings as agents of production. Marshall believed that the relative importance of mental vis-à-vis manual labour tended to increase through time; and he held the view that human capital — i.e. the physical, moral and cognitive attributes of workers, professionals and business men — is one of the most important of all inputs in the production function and one of the key elements in the process of organic growth. The aim of this paper is to present Marshall’s theo-retical and normative thinking on the economic role of education and to bring out his pionee-ring contribution to the modern theory of human capital.

This article focuses on the strategic importance of cheap food policies and imputes to that sort of state intervention the low level of current benefits in capitalist developed agricul-tures. As a consequence, corporate farming has been inhibited and family farming has found favorable conditions to develop.

This paper traces the macroeconomic roots of the current agricultural crisis. It shows that the increase in inflationary instability after 1986, and the policies adopted by the Go-vernment, since then, to fight hyperinflation, caused the terms of trade of agriculture to be-come much more unstable, at the same time that the Government pulled back the support they had been providing to agriculture; these adverse conditions ultimately caused the reduc-tion of activity levels in agriculture in 1989 and 1990. The paper concludes by pointing out the implications for the current stabilization strategy.