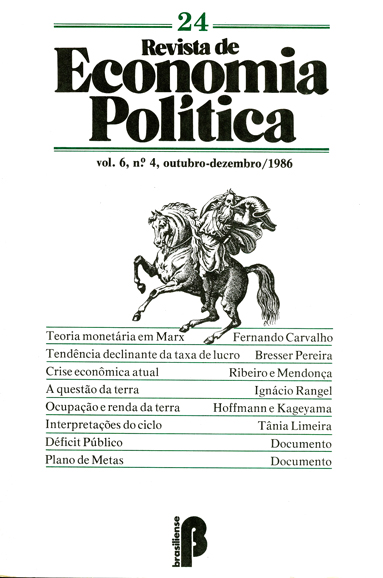 Marx’s thoughts about money and its role in capitalist economies are scattered throughout his works. In particular, they constitute a major part of the 3rd volume of Capital and of the Grundrisse. In these two works, Marx presents the foundations for a theory of money that is very dose to Keynes’s views. In the paper this similarity is shown through the systematization of Marx’s monetary theory along (post) Keynesian lines. Thc demand for money is shown to be rooted not only in the transactions motive but also in the liquidity properties of money. These properties become important in capitalist economies characterized by market uncertainty. Both Marx and Keynes use the concept of money to break Say’s law. An essential difference between the two authors is shown to relate to the measure-of-value function of money and ways to reconcile them on this issue are developed.

Given a stable rate of surplus value and an increasing organic composition of capital, Marx asser-ted that the rate of profit would tend to decline. The increase of the organic composition of capital depends, however, on the type of technical progress. It can be labor saving — and then the organic composition of capital will rise — but can also be neutral or capital saving. On the hand, only in a very special case firms will adopt new techniques that increase their costs and lower their profits. The recent debate on the Okishio theorem about this problem and Shaik’s attempt to reestablish the Marxian orthodoxy are discussed. The author concludes that the law of the declining tendency of the rate of profit is an essential instrument to understand the long run dynamics of the process of capital accumulation, but does not mean that the rate of profit will actually decline.

The 70s are marked by the birth of a threefold crisis: an economic one, a crisis in economic policy and a crisis in the economic theory, which had, until then, esmonic. The sharp growth in the world capitalist economy, the considerable decrease in the range of cyclic movements, during the post-war period, seem to have validated the Keynesian concepts arri-ved in power following the 1929 crisis and the subsequent second World War. In 1974-75 every-thing changed. The crisis reappeared in all its depth, along with it there set in a feeling of skepticism regarding the efficacity of state intervention. At the same time with all their might there re-emerged the “liberal” and monetarist thesis which had been dethroned by the impact of the events of the 30s and Keynes criticism. The purpose of this paper is to fit into the framework of the debate that exists today regarding the crisis and state intervention and to propose an interpretation of the economic difficulties triggered off by the 1974-75 crisis, from the theoretical elements left by Marx.

This paper analyses some relationships between the agrarian problem and the process of capita-list development in Brazil. It argues that the increase of productivity associated with the deepening of the social division of labor changes the relations of production in the agricultural sector. The peasantry firstly linked to the feudal latifundia becomes wage labor hired in seasonal basis for the capitalist farms. In this context, the land problem emerges as a financial issue associated basically with the land price. As a result the agrarian reform based on the purchase of large areas by the government will not be a solution for the agrarian problem since it will support an increase in land prices.

The size distribution of income within the agricultural sector, in Brazil, is analyzed, considering the weekly working time of each economically active person and his classification as employee, employer or autonomous worker. The data basis is the 1980 Demographic Census. The results show the importance of that classification in the determination of the overall inequality of the income distribution in the agricultural sector.

This paper examines inflationary adjustment processes in Argentina, Brazil, Chile, Ecuador, Peru, and Uruguay with time-varying estimation techniques to determine the relationship between inflationary inertia or feedback effects from past to current inflation and the degree of indexation of wages and exchange rates to past inflation rates. Thc results show that reductions iii the degree of exchange rate linkage to past inflation have not been particularly helpful in larger or relatively more diversified economies (such as Argentina, Brasil, or Chile), while reductions in wage linkages to past inflation rates have had strong but short-lived effects.