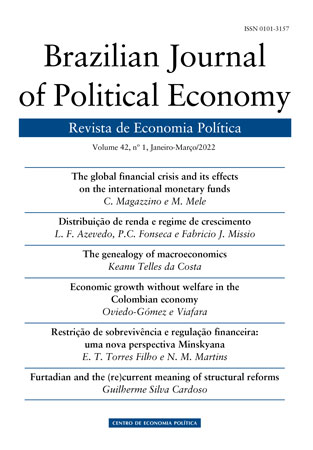 This paper aims to analyze the innovations introduced in the functions of the
International Monetary Fund in the context of the 2008 economic and financial crisis.
This promoted an action that aimed to strengthen the surveillance function through the
adoption of the Integrated Surveillance. Thus, alongside the traditional conditionality based
on an a posteriori implementation of adequate economic policies, a criterion of ex ante
conditionality in the precautionary branches was also introduced or based on the economic
characteristics of the country to be financed. Concerning traditional conditionality, it will
be asked whether the IMF has adopted a less extensive approach than its role.

The aim of the article is to empirically analyze the economic growth regimes in
Brazil from 2000 to 2015. In theoretical terms, we follow the augmented neo-Kaleckian
model proposed by Palley (2016). Therefore, we incorporate in the analysis the role of the
personal and functional distribution of income. In empirical terms, we use a vector
autoregressive model. The results suggest that the growth regime of the Brazilian economy
was wage-led. This means that capital accumulation and aggregate demand were favored by
policies to reduce inequality in the labor market and personal income. Based on the results, we discussed the Brazilian model, arguing in favor of adopting a growth model that can
reconcile income distribution and export incentive policies.

The criticism made by Friedrich A. Hayek to A Treatise on Money by John
Maynard Keynes, and the subsequent controversy that followed with the involvement of
members of the Cambridge Circus, sustained important elements to Keynes’ abandonment
of his earlier ideas and to his way to General Theory. The figure and position of Hayek
operated to clarify the underlying differences and the new theoretical routes for Keynes,
one that was more explicitly opposite to critical authors drawing from Knut Wicksell. To
some degree, the road to General Theory was paved in the famous 1931 controversy – in
particular the rejection of the Wicksell connection.

Economic growth is not always related to social welfare. Therefore, this paper
takes the case of the Colombian economy that has a strong dependence on commodity
exploitation to identify the impacts of different commodities such as oil, coffee, coal, and
nickel over economic variables. The results show that the increase in prices of commodities
generates significant impacts on economic activity in variables such as GDP and investment.
Also, there are no significant impacts on variables that provide welfare to individuals as
total consumption or the unemployment rate.

This article points out the importance of Minsky’s concept of ’survival constraint’
in the genesis of financial regulation. The risk of a systemic collapse led the States to
suspend the enforcement of the penalty related to the survival constraint – bankruptcy – on
commercial banks. This suspension allowed relevant financial agents, in the pursuit of profits,
to make even riskier allocative decisions (moral hazard), increasing the level of financial
fragility. To mitigate this moral behavior, governments introduced financial regulation, fixing
the limits that should emulate the behavior of these agents if they were still subject to the survival constraint. These rules must be permanently revisited to keep up with the evolution
of the financial markets or they will become unable to avoid financial instability.

A keyword on the footer: the Furtadian and the (re)current meaning of structural reforms
Guilherme Silva Cardoso
Brazilian Journal of Political Economy
https://doi.org/10.1590/0101-31572021-3262
View Article

A semantic change has occurred in the scope of structural reforms’ term. This
article reviews Celso Furtado’s work, in particular, the ones related to this specific topic, and
compares it with the current literature. It appears that structural reforms in the Furtadian
conception connoted base transformations and were guided by the developmentalism
school of thought. Nowadays, it is of general knowledge that, under the new-institutionalist
influence, “structural reforms” are associated with liberal policies for monitoring fiscal
consolidations, without consensus as to the power of effectiveness. The effort to rescue and
understand the original conceptions of certain keywords in the economic development
literature, as well as the way in which their interpretations and practices modify over
time, is shown to be of paramount importance as the capitalist system struggle to find ways
of adapting itself to the current situation of developing economies.

These notes aim to revisit the debate, the model, the results, and main objections
to the validity of the Ricardian Equivalence Theorem as presented in Barro (1974). It
is intended to explore his thesis that tax and debt are equivalent and have no real effect on
perceived wealth, demand, the real interest rate or on the economy. The thesis refers to the
analysis of the ways of financing debt at a given level of government expenditure and does
not address the effects of an expansion of this volume of spending, nor it specifically analyzes
the effects of an increase in public debt due to a tax reduction policy. After this presentation,
the thesis is debated, consolidating some of the premises that are necessary to validate it. The purpose of the paper is to explore the first round of debates on the theme,
explaining the restrictions to which the Barro-Ricardo Theorem or the Ricardian Equivalence
Theorem is subject, based on the publications by Barro (1976), Buchanan (1976) and
Feldstein (1976), all of them within the ‘realm’ of economic orthodoxy. The final section
presents some remarks and an analysis of Barro’s later work (1989 and 1996).

Financialization is often seen as a consequence of higher returns on financial
assets. Yet, how can that be possible if the rate of interest is systematically lower than the
profit rate? This article addresses this issue.

The paper discusses the determination of inflation in Brazil, especially after the
great recession of 2015-2016, to assess the adequacy of manipulating interest rates to control
the rise in prices due to permanent cost pressure. The burden of using the interest rate to fight cost inflation is to create a highly conventional level of the real interest rate, which benefits
the rentier class in a financialized economy. In the light of the post-Keynesian macroeconomics,
a high-interest rate convention keeps the economy with a low growth rate and a low investment
rate, which in the case of the Brazilian economy has resulted in a regression in the
productive matrix and productivity stagnation, and both contribute to perpetuating cost pressures
on prices. The empirical analysis corroborates the discussion about recent inflation having
its origin in cost pressures over which the interest rate impact for its control is limited. We
complement the empirical analysis by testing the response to the SELIC interest rate of the
variables used to explain the fluctuation of market prices and administered prices: commodity
price index, exchange rate and activity level. As expected, the impact of an increase in the interest
rate appreciates the exchange rate, favouring inflation control and reducing the level of
activity but has no impact on the commodity price index.

The research aims to point out the differences and similarities between
Corporate Venture Capital (CorpVC) and Corporate Accelerators (AC), as mechanisms of
collaboration between mature companies and Startups. The research highlighted that the
phenomenon of Corporate Accelerators and Corporate Venture Capital are open innovation
practices, which can be semi-institutionalized in companies that intend to seek innovation
in external environments. The fact that CorpVC and AC are based on strategic objectives,
and not only financial ones, differentiate them from other types of investments made directly in companies, however, it was noticed that both strategies have crucial differences,
which as previously seen by the mature company, that can be better applied, ensuring the
highest success rate based on the purpose and objective of the financing Corporation.

This paper reflects on the trajectory of Fernão Bracher in the light of
institutional advances in the Brazilian public administration since the re-democratization of
1985 onward. Descendant of a traditional family in São Paulo, Bracher will channel his
public spirit and his economic nationalism in three opportunities, notably during the postmilitary
regime period, when he governed the Central Bank of Brazil and later became, at the invitation of his friend and minister Luiz Carlos Bresser-Pereira, the Brazilian negotiator
of the external debt. Less theoretical than Bresser but as pragmatic as him, Bracher shared
his friend’s immense intellectual curiosity, having helped in the exchange of reflections
among the different economists involved with the theory of inertial inflation. A man of
action, in the private and public sectors, Bracher has a trajectory that highlights the
overcome of difficulties present in national economic policy.

The adoption of public policies to reduce inequality in Brazil has grown
significantly over the last few years, as a result of a social welfare agenda. In an increasingly
connected world, social interactions must be taken into account in policy making. This  study aims to systematically investigate and map the studies in the area of economics that
consider the role of networks in the results of social programs and income transfer. The
systematic review method shows the state of the art in the literature regarding the
employability of social networks within the scope of public policies, highlighting the main
estimation methods, network structures, the most active authors in the area, as well as the
open gaps and motivations for further research.

Article aims to integrate New Developmentalism with Ecological View by
means of the concepts of Ecological Structural Change (ESC) and Eco-Developmental
Class-Coalition (EDCC). ESC means to increase the share of green manufacturing sector in
GDP and employment for increasing the environmental efficiency of the economy. Exchange
rate overvaluation caused by Dutch disease and growth with foreign savings can harm
green manufacturing industries even more than brown manufacturing industries. ESC
needs the existence of an EDCC that can be made difficult to occur if exchange rate overvaluation
is not removed through taxes over commodities exports, capital controls and a
dual mandate for the Central Bank.