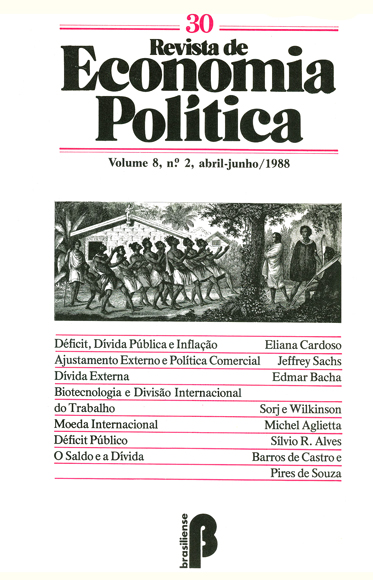 This paper offers an interpretation of the Brazilian inflation and comments briefly on the Cru-zado Plan. It emphasizes two points. First there are the problems of fiscal consolidation iii the pre-sence of a large public debt. What is missed iii many analyses of stabilization programs is precisely the particular debt situation, and the role of foreign exchange availability in successful versus non-successful programs. Secondly we discuss the role of budget deficits in the inflationary process in Brazil. Seignorage models as an explanation for inflation in Brazil are dismissed on the grounds that seignorage as a share of GDP shows absolutely no correlation with inflation. The money-goods model of monetarism is inappropriate to the Brazilian economy because it predicts that seignorage drives the system. But the Brazilian experience on the contrary has to be interpreted iii the light of changing sources of financing the budget. The inflation acceleration between 1979 and 1985 is lin-ked to the switch from external to domestic finance, and the large trade surpluses that pushed up interest rates and inflation. The paper develops a model that shows a pattern of adjustment for in-creasing inflation induced by increasing equilibrium real interest rates, that matches the Brazilian data. The Cruzado Plan failed to pay attention to the debt problem and the need for budget conso-lidation (probably through debt relief and a capital levy). In the absence of an integrated approach it pushed the economy into a classic inflationary finance situation.

The search for “adjustment programs oriented towards growth” is a reaction to a generalized disagreement with the stabilization programs that the IMF recommends for the indebted nations. A new orthodoxy is emerging from this situation, which relates the recuperation of the debtor na-tions to a change to development oriented to the external sector, based on the liberalization of in-ternational trade. This article describes many important limitations of this new orthodoxy. The strong emphasis ou liberalization has no historical basis and does not really correspond to the ex-periences verified in the successful Far Eastern economies. Moreover, it diverts attention from the more urgent needs of the indebted economies.

This article emphasizes the contradictory impact of biotechnologies on the economic system, both as between industrialized and Trird World countries, and within each of these blocs. The heterogeneous applications of biotechnology and the specific relations they establish between industrial and natural resources lead to a multiplicity of sectoral and national policies. Biotechno-logies offer Brazil the possibility for a more rational and competitive use of its natural resources, and at the same time an increased participation in key industrial sectors currently heavily internationalized. The key to success however depends on the ability to transform research into industrial strategy.

This paper shows that the universal logic of capitalism can be identified within the singularity of agricultural change in Brazil during the initial period of industrialization (1889-1930), through the mediation of a particular pattern of agricultural transformation based on large estates. The development of agriculture was marked by the process of gradual transformation of the large esta-tes (latifundia) into modern capitalist enterprises, in such a way that the Brazilian pattern could not be based on small peasant properties. As a result, the development of capitalist relations of production and the productive forces remained weak and was limited to industry, while the majo-rity of the population could not improve its poor living conditions.

During approximately two and a half years the Brazilian economy sustained a trade surplus of about USS 12 billion. The origin and sustainability of this surplus became one of the main issues on the controversy about the medium and long-term growth perspectives of the country. Using the latest data, and comparing 1987 with 1986, this article tries to show that the trade surplus collapse in the second half of 1986 was an aberration, corrected in 1987. ln the latter, the level of activities achieved in 1986 proved to be compatible with the level of surplus sustained from 1984 to the first half of 1986. The article also tries to explore some of the implications of the country s exceptional ca-pacity to generate high surplus, ending with a brief reference to its position facing the foreign debt.