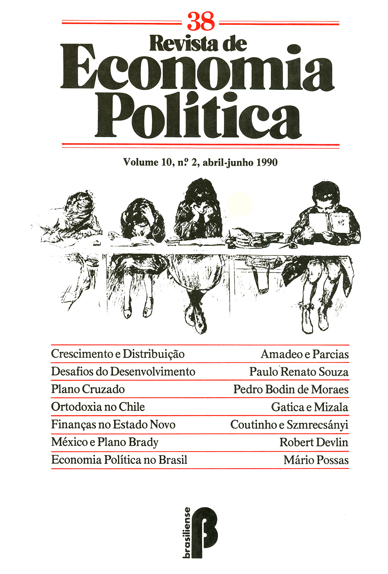 In this paper a simplified model is developed to analyze the main characteristics of the accumulation process based on Adam Smith’s view. The model is constructed on the basis of a single product and emphasizes the relation between productivity, determined by the division of labor, the proportion of the economic surplus invested in productive labor, the natural wage and the profit rate, during the phase of progress and in the stationary state of the economies. Additionally a process is suggested for determining the natural wage based on the elements stressed by the classical economists.

This article analyses the international economy speedy process of transformation, since the seventies, leading to a new pattern of growth and a new technological trajectory; seeks to show how, unlike is divulged, the State had a conclusive partici-pation straightening out some of the emergent economies, as Korea, Taiwan and the Japan itself; concluding that, it remains, to Brazil, confronting this new framework, to invest systematically in technology and to reach patterns of international produc-tivity and competitivity.

This article analyses monetary policy during the Cruzado Plan. It is argued that the establishment of the overnight interest rate at very low level (around 15%/year) was one of the main factors behind the quick appearance of excess of demand in almost all markets. This excessively slacken monetary policy was the result of the government’s decision of transforming indexated public bonds into bonds with a fixed value, assuming that future inflation would be zero. The monetary policy of the Cruzado Plan is compared to the policies adopted in Argentina in the first months of the Austral plan, and lii Israel from July 1985 on. This comparison reveals that in both cases the process of remonetization of the economy was done much more gradually than iii Brasil, and that iii both countries there was not excess demand in the initial phase of the price freeze.

The purpose of this article is to assess the Chilean economic model implemented during the military regime between 1974-1987. It is argued that the orthodox policies put into effect during these years led to slow growth and to worsen the living conditions of the majority of the population. The main reforms and stabilization policies are firstly presented. Secondly, using officials indicators we assess the results of these measures comparing with the Chilean economic performance of the sixties and with the others countries of the Latin America. Finally in the conclusion, we briefly present the main issues involved in a future economic strategy.

State intervention in the economy and governmental public policies are usually regarded in peripherical economies as one of the main factors in thc development process. According to most historians, the period of the Estado Novo had a great importance in the recent evolution of the Brazilian economy, representing a turning point from the primary-export system to the present one, based on the industrial sector and the internal market. The article intends to test these hypotheses in quan-titative and qualitative terms, by comparing the evolution of Brazilian public finance between 1938 and 1945 with the previous and the ulterior eight year periods (from 1930 to 1937, and from 1946 to 1953).