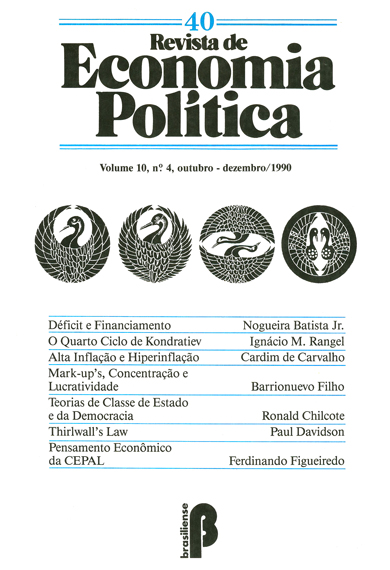 This article analyses the evolution of the Brazilian public sector’s deficit and of its sources of financing from 1983 to 1988. It is shown that the government’s growing financial problems arose, to a certain extent, from a sharp reduction in its primary surplus from 1985 on. But this was partly compensated by a substan-tially lower interest burden. As a result, there was no explosive increase in the operational deficit up to 1988. The public sector’s increasing financial difficulties resulted basically from a significant narrowing of the supply of credit, a process that began with the external debt crisis and that was reinforced by the effects of accelerating inflation combined with increasing doubts concerning the govern-ment’s creditworthiness.

The world economy is passing through the phase b (declinant) of the fourth Kondratiev long cycle. The Brazilian economy is no exception. A Kind of exception are the “Asian tigers”, where the state plays a significant role. The Brazilian policy makers should study this experience.

A comparison between East and Southeast Asian countries and Latin American countries is made with respect to public finance. Special emphasis is placed on a fiscal comparison during the 1970s and the 1980s. Government deficits widened more in Latin America than in Asia in the corresponding two periods. An unpre-cedent price hike in Latin America is positively related to these large deficits. Remarkable increases in interst payments for public debts during the 90s in Latin America narrowed the margin of fiscal policies. Therefore, some measures on debt relief as well as fundamental tax reform are urgently needed in Latin America.

Inflation has become, in the 80’s, the most important barrier to resuming economic growth in Brazil. A post-Keynesian approach to this problem stresses the effects that continuing high inflation has on beliefs and institutions, especially the system of money forward contracts that is fundamental to organize and coordinate an entrepreneurial economy. A High Inflation Regime is defined by the introduction of new monies-of-account for forward contracts, that is, indexation, and by a change in the modes of price formation. It is show that High Inflation characterizes an unstable equilibrium that may degenerate into a hyperinflation. Thc permanence of high inflation, however, may engender stagnating tendencies.