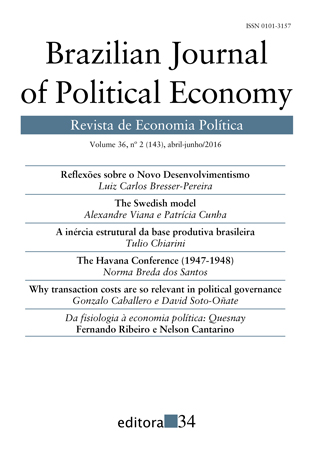 This paper describes the main details of the Swedish economic model, which began to be structured on the 1930’s and achieved its consolidation on the 1950’s. The Swedish Model is characterized by a macroeconomic policy which provides price stability, fiscal results for ive industrial policies and social active policies, the latter being recognized as a wide universal welfare state. This combination, which contradicts the traditional economic prescriptions, has been successful given the country was agrarian and underdeveloped until the beginning of 20th century and achieved a high social-economic development level on the 1970’s. Afterwards, we present the Swedish experiment as an alternative to macroeconomic management, especially due to its uniqueness.

The structural inertia in the national productive base: the FDI and the international transference of technology
Tulio Chiarini
Brazilian Journal of Political Economy
https://doi.org/10.1590/0101-31572016v36n02a03
View Article

The structural inertia in the national productive base. What can explain the fact that there was a massive entry of FDI in Brazil and it remains with a structural inertia in the national productive base? There is a series of macroeconomic facts that can help explain this inertia, such as low investment rate and the mismatching of key prices in the economy (such as interest rates and exchange rates), but the proposal made here is that there is a relevant microeconomic structural problem: lack of technological capability of Brazilian industrial firms. To analyze this proposition we separate the types of FDI (greenfield, merger and acquisition and portfolio) and the types of technology transfer channels (horizontal and vertical). From empirical and historical elements we build up the argument that the lack of technological capability is a key element in understanding the dynamism loss of the domestic industry.

This article proposes to study the participation of Latin American delegations during the Havana Conference, which negotiated and approved the Charter of International Trade Organization (ITO), including the General Agreement on Tariffs and Trade (GATT), in 1947-1948. It shows that the prevalent understanding of Latin American countries was that the Havana negotiations would be the outcome of their existing political and material power asymmetries in relation to the industrialized countries. They believed that their fragile economies should face the strong economies of the industrialized countries by economic planning and import substitution, already in place in several Latin American countries since the 1930s and the 1940. The article also shows that the construction of the post-World War II international trade regime was in fact characterized by strong material and political inequalities, which undermined Latin American countries abilities to negotiate.

The interfaces between the formation of economic theory and other branches of knowledge are rarely explored in the history of economic thought. The article seeks to bring an original contribution in analyzing the debates that took place in natural philosophy and medicine in the context in which the physiological and natural thought of Quesnay (1684-1774) was developed. It is argued that the physiological approaches of Quesnay may be related to the Tableau Economique (1758-1766) in a very different sense from that offered by Foley (1973) and by most textbooks History of Economic Thought whereby the Tableau should be seen as an analogy of the circulatory system.

The structure and the market. This paper proposes an analysis of the texts Plano Trienal and PAEG, documents of economic planning in 1960s Brazil. We aim to check, on one hand, theoretical and conceptual aspects regarding its retrospective diagnosis, and, on the other, socioeconomic conditions each text projects for the future as condition for de achievement of their intended objectives. With such an analysis we do not aim to verify if the plans are suitable to the Brazilian reality, but to understand how internal problems of texts and its relations may be elucidatory no only to the History of Ideas, but also for a broad consideration of Economic, Social and Institutional History in Brazil.

The following study is based on the comparison of the actual transition processesin Estonia and Slovenia in 1991-2000 with the aim of testing two conceptual models (shock therapy versus gradualism) of transition theory in practice. This article has two main goals, closely interlinked with each other. The first task is to analyse whether the reform paths undertaken by Estonia and Slovenia followed the theoretical concepts of ‘shock therapy’ and ‘gradualism’, the models the states are often symbolising in theoretical debates. The second task is to evaluate the ability of the theoretical models to correctly allocate the classical country examples to the shock therapy and gradualist models. This research study is also interested in what are the advantages and disadvantages of a polarised approach to transition theory models and how these models can be improved.

Financial institutions show a characteristic risk exposure and vulnerability, making them prone to instability. Financial systems in Latin America, however, were left largely unscathed by the global financial crisis starting in 2008. This state-of-the-art survey provides an in-depth analysis on the identification and regulation of systemically important financial institutions (SIFIs). While Latin America benefits from its rich historical experience in managing systemic risks, we find the problem of SIFIs to be still underestimated. However, there are first efforts to cope with SIFIs in science and particularly Latin American supervisors and regulators are starting to take the threat posed by SIFIs seriously.

It is argued direct democracy is attainable but only in ways that connect to the experiences of daily life. By modifying existing institutions of governance it is pragmatically possible to achieve a society resembling distant utopias. One proposal is based on the argument that all electoral systems are inherently fraudulent under any regime. Rather, direct democracy alone can provide substantive equality. Therefore it is suggested legislative and judicial branches be filled by lottery while leaving the demos as the executive through internet voting modeled on the principle of state propositions.