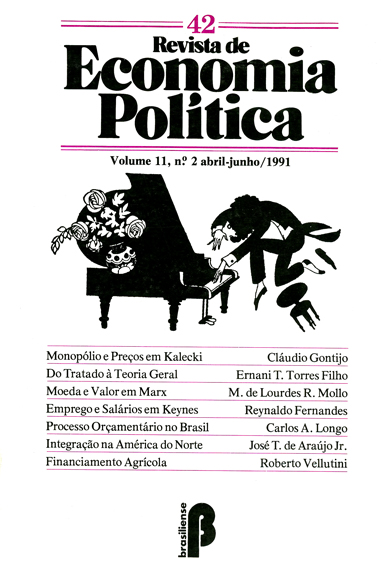 This article examines the historical roots and logical consistency of Kalecki’s theory of degree of monopoly and price determination in an input-output framework. It shows that the Kaleckian theory of prices is open in S0 far as it does not provide any systematic explanation about the determination of individuals mark-ups. Besides, it shows that the mark-up for the economy as a whole does not depend on the conditions of competition. A consistent way to close the system would be to determine the average mark-up through the Marxian rate of pro-fits and the oligopoly prices as deviations from prices of production.

The purpose of this note is to discuss the linear version of Kalecki’s price equation. First, the pertinence of the restrictions imposed by Kalecki to the value of the parameters of the equation is examined. Then, the economic meaning of these parameters is made explicit. Fi-nally, in the light of the previous discussion, a reinterpretation of the Kaleckian price equation is suggested.

The idea of monetary economy played an important role in Keynes’s movement from the Treatise on Money (1930) to the General Theory (1936). He was trying to work a new economic paradigm, which in opposition to the classical Say’s Law, could deal with the fluctuations and uncertainties of the real world. The purpose of this article is to present Keynes’s theories of savings and finance in the Treatise and after and to show the importance of the 1936-1937’s version to the functioning of a real world economy.

This paper is an interpretation of Marx’s Theory of Value. Attention is called to the link which Marx has established between value and money, in capitalist economies, both in the sense of the genesis of money from commodities and value, and in the sense of the imposition of the law of value through monetary restriction. In the first part, value is defined as social represen-tation of labor in capitalist economies. The second part analyses the imposition of the law of value to commodities through money. Finally, the third part analyses how the law of value imposes itself over money.

This paper discusses the determination of wages and employment under a Keynesian perspective, stressing mainly the microeconomic aspects of the effective demand. The adopted approach follows the “Weintraub tradition”. It is argued that the level of employment depends only upon the effective demand assum-ing that relative prices are rigid. However the real wage is a function also of the level of employ-ment and the relation between nominal wages and the user cost.

Brazil, as well as most Latin American countries, have an inflated public sector, which follows from the expansive government policies pursued until late 70’s, largely financed by external indebtedness. Currently, the lack of transparency and the complexity of public sector accounts hinder the effectiveness of stabilization policies and the productivity of state enterpri-ses. Federal government budget is often balanced, but it does not cover expenditures of the whole public sector. A large amount of subsidies to state enterprises and local treasuries are pro-vided indirectly with federal funds through state banks and monetary authorities. A full-scale bailing out program to alleviate highly indebted enterprises will allow the Central Bank and other financial intermediaries to stop acting as a lender of last resort. In order to fully recover the effectiveness of government policies it is necessary to decentralize national expenditures, grant autonomy to local governments and state enterprises and to minimize their financial mu-tual dependence.

This paper compares the negotiating process of two trade agreements: Canada/USA and Argentina/Brasil. The main topic discussed is the harmonization of economic policies. In order to create a free trade area or a common market, governments have to face a difficult choice, between the economic benefits of an integration and the political costs of a restricted so-vereignty. Two different configurations of this dilemma are analyzed in the paper.

The historical precedents of the neoliberal experiment in Chile have been scarcely studied. However, it can be argued that the feasibility of this experience was contingent upon the bases built during previous periods of the Chilean development, starting from the 1940’s. The export growth and diversification of the neoliberal period was based on three main economic sectors: fresh fruit and vegetables, forestry, and fishery. The development of these sectors was in turn based on CORFO’s development programs, which combined private and public efforts with, in some cases, foreign assistance. Also, the copper nationalization process in 1971 was instrumental to the strengthening of the state’s economic capabilities. These facts point out a very significative difference between Chilean neoliberalism and other orthodox experiments within Latin America.