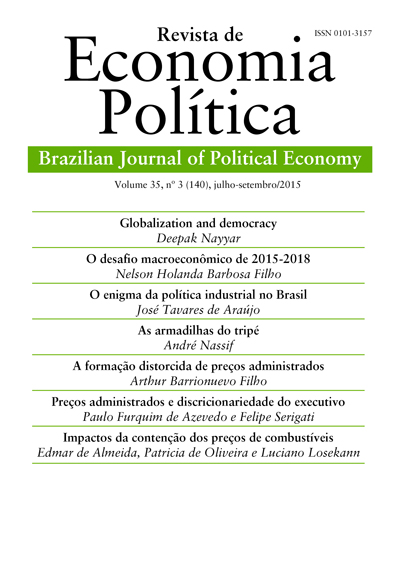 The gathering momentum of globalization in the world economy has coincided with the spread of political democracy across countries. Economies have become global. But politics remains national. This essay explores the relationship between globalization and democracy, which is neither linear nor characterized by structural rigidities. It seeks to analyze how globalization might constrain degrees of freedom for nation states and space for democratic politics, and how political democracy within countries might exercise some checks and balances on markets and globalization. The essential argument is that the relationship between globalization and democracy is dialectical and does not conform to ideological caricatures.

This paper presents a macroeconomic outlook of Brazil at the end of 2014 and an analysis of the main challenges to its macroeconomic policy in the subsequent years. On one side, the analysis is focused on the relationship between interest rates, growth and the real exchange rate. On the other, the paper also analyzes the multiples aspects and problems of fiscal policy in Brazil.

This paper analyses the so-called tripod of the Brazilian macroeconomic policy, which since 1999 has been combining an inflation target regime, a floating exchange rate regime and targets for primary fiscal surplus. I argue that, unless its modus operandi is changed, the tripod will not be able to free the Brazilian economy from another “possible trinity”: high real interest rates, real exchange rate appreciation and very low economic growth. After briefly analysing the theoretical base under the macroeconomic tripod, I will show why this macroeconomic policy regime, if it is evaluated in a medium or long-term perspective, has not been able to assure neither price stability nor economic growth. In addition to the suggestion of breaking with the Brazilian strategy of growing with foreign savings, the paper also suggests three main ways of changing the modus operandi of the Brazilian tripod: i) increase the time horizon for reaching the inflation target, as has been the experience of most countries that adopt this monetary policy regime; ii) restore the countercyclical role of the Brazilian fiscal policy; and iii) adopt a mix of instruments aiming at preventing the Brazilian currency from entering into a new cyclical trend of appreciation in real terms.

Crisis and industrialization in Brazil between 1929 and 1954: The reconstruction of the National State and the national development policy
Wilson Cano
Brazilian Journal of Political Economy
https://doi.org/10.1590/0101-31572015v35n03a04
View Article

This paper focuses on the main effects - between 1929 and 1954 - brought about by the economic policy of coffee crisis and industrialization efforts led by the National State. It distinguishes Vargas developmentalism mandates I and II (30-45 and 51-54), comparing it to Dutra’s unsuccessful attempt to restore liberalism (46-50). It highlights the important reconstruction effort of the state and the introduction of national control instruments of economic policy, embodied the extraordinary work of the Vargas’ Presidency Economic Advisory (51-54), where great Brazilian names were enshrined, such as Rômulo de Almeida, Ignácio Rangel, Jesus Soares Pereira, Cleanto Paiva Leite and Tomás P. Acioli Borges, true builders of the major projects and development plans at that time.

Over the last 10 years, the Brazilian government has launched several industrial plans to promote innovation and strengthen the competitiveness of the domestic industry. However, the results have been poor due to the distortions created by some instruments inherited from the import substitution age, such as high tariffs on intermediate goods and machinery, local content rules and antidumping protection. This paper highlights the role played by those instruments using two examples: antidumping investigations and a peculiar local content rule that exists only in Brazil, the so-called Basic Productive Process (PPB).

This article discusses the necessity for microeconomic price adjustment in Brazil at the end of the first government Dilma Rousseff (2011-14). The price control in Brazil is done by different means, by the three levels of government, federal, state and municipal. It includes services regulated by agencies in infrastructure sectors such as electricity, fixed telephony and road tolls; the direct control of state enterprises prices, as in the case of petroleum products, or through specific legislation as in health services. However, the different levels of government eventually distort prices through arbitrary measures, given short-term political objectives, disregarding the institutions designed to define them. The emphasis of the paper is to evaluate the evolution of these prices during the last presidential term and the difficulty of maintaining realistic administered prices in such a context.

We discuss historic trends in large metropolitan areas in Brazil showing that manufacturing has decreased its share in the country but the movement was, in general, more intense in large metropolitan areas and particularly in the São Paulo metropolitan area (SPMA). This movement was more intense in the 1980s and in the first half of the 1990s. From mid 1990’s up to the end of the 2000s, the manufacturing share trend became flat. We speculate that the first period reflects the exhaustion of the process of import substitution that took place in the previous three decades (1950 to 1980). The second period, from 1993 to 2009, is representative of a new model of growth and the evidence that manufacturing share became flat is reinforcing the idea of a new period in terms of manufacturing employment. While concentration has risen from 1996 to 2005, it decreased again in the second half of the first decade of the 2000s. The SPMA reinvented itself very quickly from late 1970s to mid-2000s.

Administered prices during the first term of President Dilma were used as an instrument to meet inflation target, so as to subordinate industrial policies to short run macroeconomic aims. This strategy was ineffective to control inflation and distorted investment and consumption decisions. The article shows that prices tend to deviate more the larger their weight in the price index, and tend to vary consistently with the political cycles. The article concludes with policy suggestions to control the negative effect of deviations of government discretion to determine administered prices.

Petrobrás was severely affected by the government’s fuel pricing policy. By meeting the increasing demand of LPG, diesel and gasoline, whose prices were below international reference, the company has lost R$ 98 billion in income from 2011 to 2014. In a period of high investments due the exploration of the Pre-salt, this loss raised Petrobrás debt and deteriorated its financial situation. Should full alignment with the international price be not politically feasible, the international experience suggests adopting stabilization fund as proper pricing mechanism. Political interferences in its management, however, should be prevented.

The term “energy nationalism” is frequently used by academic literature and media, but usually without adequate conceptual accuracy. Despite this, a set of papers deepens the discussion on the relationship between nation states and the energy industry, especially the oil sector. These papers allow identifying fundamental elements to understand the energy nationalism, either complementary or divergent between each other. Thus, this study aims at presenting an interpretation of the concept that fills the gaps left by the above mentioned literature based on a global analysis of the oil industry structure and its historical evolution since the mid-19th century.

The poor performance of the Brazilian industry in the post-crisis 2008, resumed the debate surrounding the need of an industrial policy outline. Accordingly, and given its characteristics, the investment in infrastructure figures a conciliatory and efficient alternative in the task of returning competitiveness to this sector. Thus, this paper aims to deepen the debate on the issue of deindustrialization of the Brazilian economy and contribute to the discussion on the functionality of infrastructure investment as an instrument of industrial policy, emphasizing its conciliator character in what we call here a base industrial policy.

Why budget accountability fails? The elusive links between parliaments and audit agencies in the oversight of the budget
Carlos Santiso
Brazilian Journal of Political Economy
https://doi.org/10.1590/0101-31572015v35n03a12
View Article

Performance and fragmentation of Mercosur high-tech industry. The objective of this paper is to evaluate the actual ion of the Mercosur in the international trade of goods with high technology and the degree of progress along the technological chain. The main contribution of this paper is to construct an indicator of value added, results from the difference between exports of final goods and imports of parts and components. This indicator allows a more appropriate analysis in terms of trade balance, of sectors increasingly embedded in processes of production fragmentation. The main conclusion is that there is no strong evidence that such countries are moving towards more downstream stages of the value chains in high technology sectors, except for the aircraft industry (especially Brazil).

This paper examines one of the possible channels through which incumbent elites aligned with the Brazilian dictatorship were able to withhold their political power during the democratization in the 1980s. Based on national household survey data and results from legislative elections, we first find that recently franchised illiterate voters who lived in states that were dominated by the elite party during the dictatorship had a higher probability to register to vote than those who lived in other states. We then investigate whether this positive correlation represents a reaction from the incumbent elites in order to keep their political power through voter manipulation or a reaction from these voters in order to remove the power from the oligarchies. We find that, in states dominated by the elite party, illiterates had higher probability of being politically uninterested and uninformed. Our results suggest that a politically motivated reaction from this population is implausible.

David Hume and the finances of James I. This paper examines David Hume’s analysis, conducted in his book History of England, of the struggle between parliament and King James I over the Crown finances during the first quarter of the seventeenth century. Initially, it presents the main political elements behind the quarrel played out in the heart of England’s political power, followed by the Scottish writer’s comments on the royal finances, with emphasis on his views about the Crown receipts and expenditures during James’s I reign. In the end, the long run determinants of the parliamentary resistance to regal power identified by Hume are retrieved.