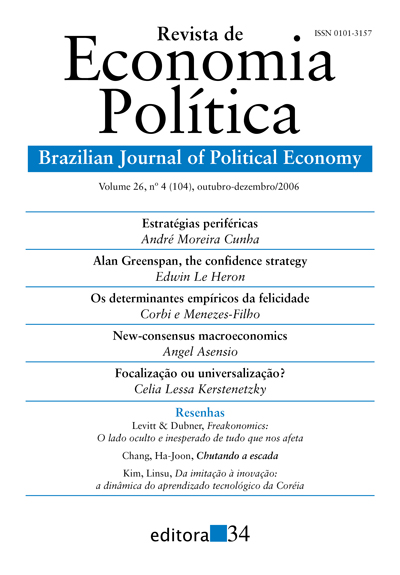 After sixty years, the Bretton Woods Agreement continuous to be a reference for the debates concerning institutional organization of the international monetary system. This paper compares some features of the arrangements that have emerged in that context with the recent wave of institutional reforms in the international financial architecture. We explore some arguments suggesting that, in an instable financial environment, is possible to envisage a strong rationality in strategies for emerging economies associated with a more active capital flows and exchange rate management. Apparently, those strategies are not dissimilar to the ones today’s advanced countries had used in Bretton Woods Era.

To evaluate the Greenspan era, we nevertheless need to address three questions: Is his success due to talent or just luck? Does he have a system of monetary policy or is he himself the system? What will be his legacy? Greenspan was certainly lucky, but he was also clairvoyant. Above all, he has developed a profoundly original monetary policy. His confidence strategy is clearly opposed to the credibility strategy developed in central banks and the academic milieu after 1980, but also inflation targeting, which today constitutes the mainstream monetary policy regime. The question of his legacy seems more nuanced. However, Greenspan will remain ‘for a considerable period of time’ a highly heterodox and original central banker. His political vision, his perception of an uncertain world, his pragmatism and his openness form the structure of a powerful alternative system, the confidence strategy, which will leave its mark on the history of monetary policy.

This paper investigates the role that economic variables play in the determination of happiness, using reported happiness as a proxy to individual well-being. We use microdata extracted from the World Values Survey for five countries, emphasizing the Brazilian case. Our findings suggest that there is a positive and significant correlation between happiness and income. Unemployment is also a large source of unhappiness. In most cases, happiness appears to be positively correlated to being married. Moreover, happiness is apparently U-shaped in age (minimizing at 50s).

The paper presents both the New Consensus and Keynesian equilibrium within the usual four competitive macro-markets structure. It gives theoretical explanations of the pernicious effects that the NCM governance, which has been designed for ergodic stationary regimes, brings about in Keynesian non-ergodic regimes. It put forward Keynesian principles of governance which include monetary, budgetary and fiscal instruments, and suggest new directions for the positive and normative analysis of macro-policies.

Public debate on social policies in Brazil has focused on the choice between targeted and universal programs. The article argues that the choice is unclear and misleading unless a previous decision is taken concerning principles of social justice. After distinguishing three different connotations of targeting – as residualism, conditionality or retification – and noting that universal programs may be compatible with minimalist social policy, the article goes on to make explicit a number of neglected options.

In this paper, we analyze the relationship between the land market failures and the economic growth in Brazil, starting from an overlapping model including two sectors: agricultural and industrial. The land is both a specific factor for agriculture and an asset that can be substituted to the capital used in industry. The trade-off between land and capital holding depends, among other factors, on the transaction costs on the land market. These costs result from land insecurity and generate a decrease in the land price that favors capital accumulation. Two assumptions follow from our model: one the one hand, land insecurity has a negative effect on the land price; one the other hand it has a positive effect on economic growth. These two hypotheses are tested on panel data for Brazilian Federation. The econometric results do not reject our hypothesis.

The economic literature relative to Brazilian labor market informality is very disperse and presents a significant lack of organization. In that sense, the purpose of this paper is to organize and discuss on a systematic way the main pieces of literature concerning informality in the Brazilian labor market using, whenever it is possible, the international literature as a comparison point for the existing results relative to Brazil’s experience. More specifically, questions related to wage differentials between formal and informal workers, labor market segmentation and the effect of institutions on the informal sector are emphasized.