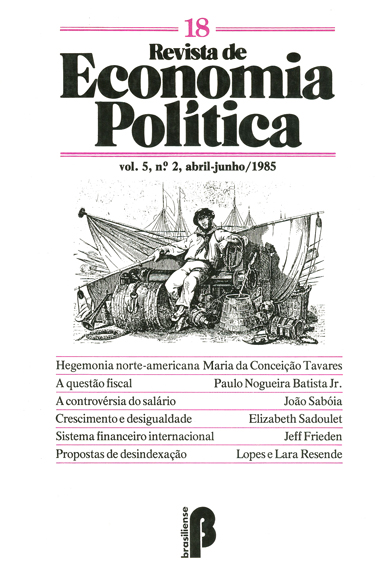 Until 1980/81 it was not reasonable to suppose that U.S.A. could be able to reaffirm its hegemony upon their western competitors, neither they had tried to pass to a new international economic order and to a new labor division which they cowl control. Today this probability is very high. In case U.S.A. keep the present policy with the same vigour until 1988, without causing an internal or international financial crash, then they will complete a decade of absorption of liquidity, capital and credit from the rest of the world. The U.S.A. will also reach a five-year growth at the expense of the relative stagnation of their more important capitalist competitors.

This paper provides a critical evaluation of some aspects of the recent debate on fiscal policy in Brazil. It argues that orthodox as well as heterodox analyses of the size of the fiscal deficit tend to incur into conceptual or factual errors that seriously obstruct an adequate understanding of the issues involved. A mistaken comprehension of certain basic concepts and even a tendency to disregard available statistical information are shown to be some of the main causes of the inconclusive nature of the discussions about the state of public finance in Brazil. Section 1 examines the conceptual difficulties involved in the application of the concept of public sector borrowing requirements as defined in the IMF programme for Brazil. Section II discusses the validity of the statis-tics on the public sector’s “operational” deficit and of the assumption that public finances are now basically under control. The final section summarizes the main con-clusions.

A few articles appeared recently in the Brazilian economic literature discussing the role played by minimum wage in the determination of the wage-rate in the formal sector of the economy. This paper tries do shed some light in the discussion through the utilization of new empirical evidence. We end up by concluding that minimum wage is very important to determine the wage-rate in Brazil.

The industrialization policy executed in several developing countries (Brazil and Mexico, for example) produced an unusually fast growth of these economies, when such policy succeeded. Nevertheless, the recent evolution shows that the main problems were not really solved. Through the development of a model, this paper studies at length the mechanism of social disarticulation, which is understood as the incapacity of the modern sector to promote the development of the whole economy, particularly in the Brazilian case (from 1968 to 1973), at the top of what was then called “the Brazilian miracle”.