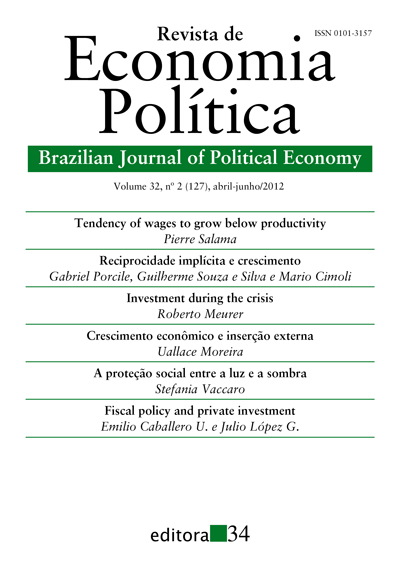 The apparent stability on relative shares in revenue during the 2000s, or even the increase increase in wages share in Latin American countries, seems to be a "surprise" in Kaldor’s opinion, or even a "mystery" for Schumpeter, or well finally "a reproach to economic theory" according to Robinson. Various theories trying to explain sharing of value added insist on investment relative size, saving importance, different types of technical progress (biased or not), amount of idle capacity, cost structure, intermediate products importance, higher markup rates searching by entrepreneurs and, consecutively, on distributive conflict. We will analyze main macroeconomic models - those of Kaldor, Robinson and Kalecki – in order to overtake that "reproach to economic theory".

This paper discusses some of the structuralist ideas about international coordination and growth in an international system formed by countries whose productive structures and technological capabilities are strongly asymmetric. These ideas are formalized taking as a point of departure the Keynesian Balance-of-Payments constrained growth model with two countries. To this model is added a function (based on the catching up literature) in which the income elasticity of the demand for exports and imports depends on the technology gap. The model allows for discussing the inter-relations between the fiscal and the industrial and technological policies. It also allows for finding the rate of growth of autonomous expenditure in the periphery which ensures that it will use all the foreign exchange it earns in promoting economic growth (the principle of “automatic reciprocity”).

In this short article, it is analyzed as to whether financial flows and credit concessions explain the behavior of investment in the Brazilian economy during the 2008 crisis. Beyond the importance of demand, changes in expectations seem to be an important source of instability in investment and, as a consequence, in the economy.

The paper analyzes the importance accorded to the high technology industry sector in the process of economic growth, in its relation to international trade. Considering at first liberal arguments that disregard productive and commercial specialization as a cause of unequal economic development, the paper discusses then some institutionalist and evolutionist arguments which, since List, stress that high technology specialization matters for the rate of increase of productivity and for the surmount for foreign exchange restrictions to growth.

This article tries to reveal some subject formation traces facing itself and the society that it is ed to discuss the Social Protection importance in Knowledge Economy as the Human potentialities expansion factor. The assumption is the connection between the individual and the world happens in a dynamic relation where the individual shapes the society and the society is shaped by the individual. So Fromm’s Social Psychology (1941) is used to clarify the appearing of the fears and humans passions and Gorz’s no material concept (2003).

The main objective of the paper is to assess the impact of fiscal variables on private investment comparing some Latin American economies to other advanced ones. For such purposes, the authors carry out an econometric analysis for the period 1990-2008. They make use of two dynamic panel models in which they group countries with similar characteristics and development levels. In one of them, they include Mexico, Brazil, Chile, Colombia and Uruguay; whereas in the second one the countries accounted for are the U.S., Canada, Spain, Korea, Ireland and Japan. They specify in both models an investment function using as arguments a wide range of variables, including those related with fiscal policy. From their results the authors infer that governments can, with higher spending, boost up the economy even when they finance spending with higher taxes. In Latin America, where income concentration is enormous, a proposal to boost up the economy through higher government expenditure financed with a progressive income tax, is even more justified.

We use two frameworks to analyze the recent Brazilian public debt management. The first one encompasses the Brazilian optimal public debt management analysis through the examination of the correlations among the main variables to which the public debt is indexed. The second seeks to address the consequences of recent Brazilian economic policies, such as international reserves accumulation through sterilized interventions by the Central Bank and excessive capitalization of federal financial institutions. Those policies have important, albeit often ignored, fiscal impacts, which became important to determine the current size, maturity and composition of the public debt stock.

This paper critically discusses the inflation targeting regime proposed by orthodox economists, in particular the Taylor Rule. The article describes how the Taylor Rule assumes the argument of money neutrality inherited from the Quantitative Theory of Money. It discusses critically the ways of operation of the rule, and the negative impacts of the interest rate over the potential output. In this sense, the article shows the possible vicious circles of the monetary policy when money is not neutral, as is the case for post-keynesian economists. The relation of interest rates, potential output and the output gap is illustrated in some estimates using the methodology of Vector Auto-regressive in the Brazilian case.

This article presents an empirical analysis based on cross-country data concerned with two points regarding corruption: (i) its effects on income; and (ii) how to mitigate corruption. The findings can be highlighted in two points. Firstly the idea that corruption is intrinsically connected with income is confirmed. Secondly, the traditional argument that an increase in rule of law represents a good strategy in the fight against corruption is valid for developing countries. Furthermore, this study reveals that the search for increasing the human development index represents a rule of thumb for high levels of income and to control corruption.

Even though the transformation problem in general does not have a widen accepted solution, it is possible to recognize scientific progress when the historical phases of the debate are put side by side in order to complement each other. Therefore, the debate originated from the challenge of the conciliation of the law of value with an equal average rate of profit, though sometimes said to be unfruitful by economists, shows evolution in the long run because it forces non-marxist economic schools to confront concretely the quality side of value in theory and to develop abstract models of planned economy in practice.

In volume 31 (5), 2011 of this journal we published these ten theses, but, by mistake, we used a previous
version of it. This is the correct final version.