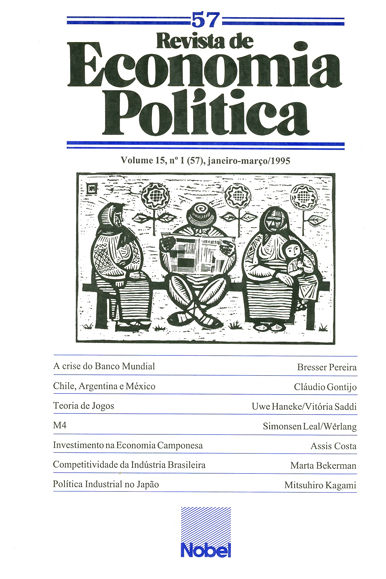 This paper discusses World Bank’s identity while surveys development economics. Three crises are identified: (1) the Bank was created to finance state infrastructure projects according to the development economics relevance given to externalities, but since the neoliberal wave dominated Washington, its mission lost clarity; (2) the Bank, that is supposed to finance development, stooped to have a positive cash flow with many developing countries; and (3) the Bank is assumed to support growth of the developing countries, but in the debt crisis it clearly aligned with its major shareholders. Yet, the Bank keeps a major role in the world, as it is increasingly turning into a service institution counts with highly competent economists, as it supports much needed market oriented reforms, and as it promotes investments in human capital

This article examines Chile’s 1976-81, Argentina’s 1987-92, and Mexico’s 1982-92 stabilization experiences. In these three cases high inflation was curbed after orthodox stabilization policies with liberal structural reforms had been followed by using a fixed exchange rate as an “anchor” for the price level. It suggests the existence of a trade off between internal and external equilibria. Orthodox stabilization policies can be very successful in equilibrating the balance-of-payment without producing price level stability. In contrast, curbing high inflation may require fixing the exchange rate, which, combined with trade liberalization, may produce huge commercial deficits.

The paper tries to highlight the influence of the 1994 three Nobel prize winners
– J. Nash, R. Selten and J. Harsanyi on game theory as well as on economic theory. On the
basic of textbooks examples the paper may also serve as a brief introduction to game theory
itself. Some major concepts like Nash equilibrium, subgame-perfect equilibrium, trembling
hand equilibrium and Harsanyi’s transformation are introduced to show with some examples
the growing importance of game theory in modem economic theory.

This article is a remake of usual macroeconomic models, as the IS-LM. We use
as exogenous (under the control of government) the ample monetary aggregate M4. We start
by a careful analysis of the Walras’ identity, extending Simonsen (1983). As a result, it is
possible to see that with M4 it is necessary to abandon either the IS – curve (i.e. equilibrium
in the market for goods and services) or the LM – curve (equilibrium in the money market).
Then, we analyze the demand for M4 in Brazil. Finally, we study a LM4 – LM macroeconomic
model. The usefulness of the model is clear: one can directly verify the impact of variations
on M4 in the macro variables.

This paper presents a model based on Marx and Chayanov which explains investment
by the peasant production unit. The paper presents the basis of Marx’s pessimistic
view, and Chayanov’s approach to the peasants’ special propensity for investment. Based
on this discussion an analytical model is formulated which considers the Chayanovian potential
derived from a microeconomic perspective of the peasant, and the limits on peasant
investment in a capitalist system derived from a marxian macroeconomic perspective on the
specific characteristics of petty commodity production. Finally, the paper points to generalizations
which center on the contradictions between real restrictions determined by macro
variables and the subjective potential of the family production and consumption unit, the essential
focus of the interpretation of the diverse forms of the relationship peasant/capitalism.

The work looks at the current situation of the Brazilian industrial sector as well as
the strategies carried out to increase external competition. It also analyzes two specific industrial
sectors: food and petrochemicals, and their position regarding the process of integration
with Argentina. The large increase in the Brazilian external trade balance during the 1980s
was the result of some factors which seem difficult to sustain in the long run. On the other
hand, the implementation of the industrial policy established from 1990 has been very slow.
However, there is a clear disposition both in the private and public sector to carry out a process
to improve competitiveness and to allow the survival of an industrial sector whose level
of production is still higher than the Asian tigers all together. But the success of an industrial
strategy will depend on the resolution of the current political and macroeconomic problems.

There are two views on “industrial policy”, negative and positive. Negative
views say the market mechanism is the best way to allocate resources efficiently. Thus, government
policy with preferential treatment for a specific industry hinders this market force
and leads to a misallocation of resources. On the other hand, positive views say that state
intervention is necessary since market forces sometimes fail to allocate resources efficiently.
Broadly speaking, this is an issue on relationships between the state and the market, or to
what extent we can rely on the “invisible hand” of Adam Smith.

The purpose of this paper is to analyze the determinants of food security and its
linkages with economic development in Latin America, with emphasis on the case of Brazil.
Using the approach of “Development Economics”, it focuses on the main conditions for economic
growth with social equity, having food security as one of them, and its requirements
in terms of global and sectorial policies.

This note studies the supply conditions and the demand behavior in the first
months of the Cruzado, Collor and Real plans. The main conclusion is that, independently
upon the real interests, consumption presents a similar qualitatively pattern. Hence, as it
seems unavoidable an increase in consumption in the first months, economic policy makers
should previously create supply conditions before the implementation of plans. In this point
of view, the Real Plan was the one which presented the best supply conditions relatively to
Cruzado and Collor plans.

The capital/product relation in the classical political economy appears as a contradictory
relation between capital and labor. In conformity with the theory of value, as productivity
increases, the commodities are depreciated in labor value, while capital is defined
as value in self-expansion. This paper argues that the increase of the capital/product relation
(or organic composition of capital) is theoretically linked to the decrease of the price level.