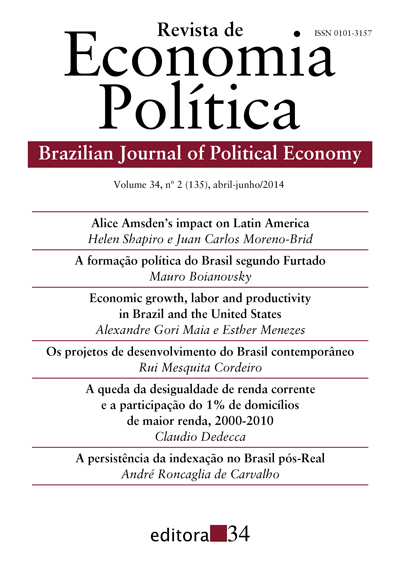 On March 15 2012, we lost Professor Alice Amsden, a great intellectual power in development economics. Her work was systematically marked by creativity, originality, relevance and her fearless commitment to always speak truth to power both in academic as well as in policy-making arenas. This In Memoriam concentrates on just one part of her great intellectual legacy: her impact to better understanding Latin America´s development challenges, obstacles and policy options. Our paper focuses on three broad areas of her main influence in the region: the role of transnational corporations, the importance of manufactured exports for development, and industrial policy. As we here argue, in all of them, her work is and continues to be a substantial contribution to knowledge that policy makers will be well advised to take into account if the region is to finally enter a path of structural transformation and sustained economic and social development.

The article provides a broad view of Celso Furtado’s interpretation of the political development of Brazil, spread over his several writings. Furtado’s approach was dominated by his analytical effort to understand the effects of the distinct socioeconomic foundations of the United States and Brazil on the development of their respective structures of power. The persistent influence of the Brazilian colonial patriarchal regime was reflected on the fragility of democracy as a political arrangement throughout most of Brazilian history, including the oligarchic republic before 1930. The mismatch between the industrialization process and the inertia of the political system led to unstable populism and eventually to the attempt of military arbitration in 1964.

The aim of this paper is to analyze the relation between economic growth and labor market dynamics in Brazil between 1981 and 2009, making a comparison with the United States. Among the findings, one can mention that economic growth in Brazil has been related to a massive incorporation of labor force in labor intensive activities, whereas, in the United States, to a substantial improvement of labor productivity in high-technology activities. Despite the favorable economic context in the 2000s, huge inequalities between these countries have widened since the structure of the Brazilian labor market remained with few or no changes.

This paper makes an analysis on the expansion of the development debate, from the rise of the democracy and social justice cycle, in the Brazil of the post-national-developmentalism era, using as method the structural-historical approach. Initially, the article will feature the three main cycles of development of the country, according to the chronology proposed by Bresser-Pereira. Later, they identify four causes for the transition from second to third cycle. Finally, some considerations are made about the current development cycle, interpreting the political spectrum of development projects in dispute in the contemporary Brazil.

The reduction of income inequality and the participation of the top 1% in the Brasil, 2000-2010
Claudio Salvadori Dedecca
Brazilian Journal of Political Economy
View Article

According to OECD, the recent process of deterioration of the income distribution chain in developing and developed countries has been marked by increased participation of 1% of households with higher income. In the past decade, Brazil has escaped the general trend of deterioration of the income distribution. This paper shows that the reduction of economic inequality was accompanying the reluctance of the participation of top 1%, arguing that the reproduction of the movement more generally requires that this participation has been reduced in the current decade, to enable sustained growth and development with justice social.

The paper analyzes the shortcomings of the Real plan combining political science and economics, considering evidences on difficulties in implementing a complete plan of deindexation, namely: the distributional conflict, the corporatist relations between the State and society and the bureaucratic isolation of a highly specialized technocracy. The announcement of the plan triggered defensive reactions, fueling distributive tensions during the URV period, forcing the economic team to take measures that contradicted the overall guidelines followed. The persistence of indexation mechanisms indicate the resulting obstacles in seeking a reform of the State through a stabilization plan, even though the latter has the former as a precondition.

The starting point of this essay is to show that, in our view, the problem of the traditional economics is not in the deductive method nor the mathematical methods used, but to attribute to economic agents 'power' on the future and prescribe the existence of ergodic stochastic processes in their economic analyzes. Thus, building a theory on the ground whose bases are not able to sustain a proper understanding of the world, mainstream economics has difficulties in using the modeling for establishing deductions and conclusions that help understanding the system. Thus, the logical-mathematical rigor in economic models and deduction can be used with appropriate axioms, which is not the case of mainstream economics. Our hypothesis is that the inability of the mainstream in predicting economic crisis is due to the non-recognition of some principles that best describe the dynamics of financialized contemporary capitalism, as the principles of non-ergodicity and Keynesian uncertainty.

The paper analyzes the contributions of Mario Henrique Simonsen to the construction of the concept of inertial inflation and to its connected literature. Simonsen’s curve, in which the idea of inertial inflation was implicit, is analyzed, alongside with the feedback model (modelo de realimentação) and it’s shown how Simonsen built a model which considered inflationary inertia, neutralization possibilities and possible problems and costs of stabilization, anticipating many of the issued that guided the debate in the 1980s.

In this article, we present an interpretation of the Hicks' first review of Keynes´s General Theory. First we analyze the influence of Hayek's theory on the work of Hicks. We show how Hicks, reflecting on the Austrian theory of the business cycle, created the concepts of "week" and temporary equilibrium. Then we discuss how the author reformulated these concepts of time and equilibrium to interpret the General Theory.