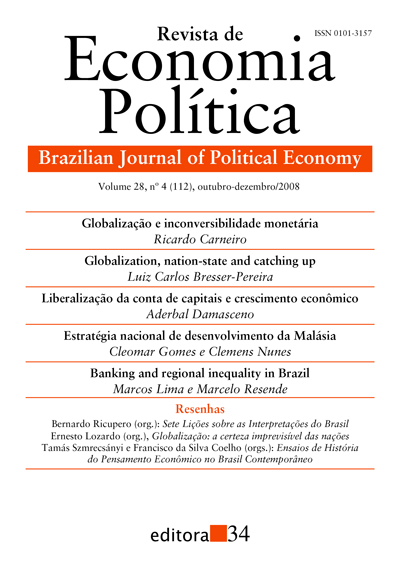 The central hypothesis of this article is that in the context of globalization, monetary inconvertibility is a crucial problem of peripheral countries. It begins with a brief review of the debate from a historical point of view and then stresses the contemporary opposite’s views on the fragility of financial system of emerging countries: the original sin and the debt intolerance hypothesis. Despite of supporting the first one, the article goes further and explores the domestic implication of inconvertibility. It criticizes the jurisdicional uncertainty proposition showing that an inherent flaw in the store of value of emerging market currencies, derived from original sin is the main reason for de facto inconvertibility and underdevelopment of domestic financial system of these countries.

Globalization and nation-states are not in contradiction, since globalization is the present stage of capitalist development, and the nation-state is the territorial political unit that organizes the space and population in the capitalist system. Since the 1980s, Global Capitalism constitutes the economic system characterized by the opening of all national markets and a fierce competition between nation-states. Developing countries tend to catch up, while rich countries try to neutralize such competitive effort, using globalism as an ideology, and conventional orthodoxy as a strategy. Middle-income countries that are catching up in the realm of globalization are the ones that count with a national development strategy. This is broadly the case of the dynamic Asian countries. In contrast, Latin American countries have no longer their own strategy, and grow less. To add data to the argument, the author conducts an econometric test comparing these two groups of countries, and three variables: the rate of investment, the current account deficit or surplus that would indicate or not a competitive exchange rate, and public deficit.

This paper aims at studying Malaysia's national development strategy in the last three decades. Firstly, we will give emphasis to the country's economic planning development, its medium-term and long-term plans, as well as Mahathir's political influence. Secondly, we will try to identify key elements in the Malaysian growth process, such as its exchange rate and current account policies, the participation of the government in the whole process and matters related to domestic savings and foreign direct investment. We will also talk about the 1997 financial crisis.

Although target regime seeks to serve as a reference for the expectation formation process of the agents, its implementation does not necessarily imply the acquisition or the best result in terms of economic growth. The present article aims the development of a model that explains, by firms' investment decisions, the prodict path behavior, undertaking monetary authority may present distinct situations associated with the reputation-credibility-transparency trinomial. The article also detaches different kinds of reputation and its degrees.

The paper investigates a neglected aspect of regional inequality in Brazil, namely regional inequalities related to financial flows. A synthetic regional financial inequality index is proposed and calculated in a semester basis over the 02-1994/02-2000 period. The inequality measure attempts to capture to what extent deposits in a given state translate into credit operations in that locality. Two main results emerge. First, non-negligible inequality patterns emerge when one considers the segment of private banks and those are consistent with an important proportion of states with a predominantly exporting pattern, for which deposits surpasses loans in that locality. Second, if one focus on the segment of public banks, an opposite pattern appears,that is consistent with decision patterns that might have, in part, a regional development motivation.

This paper analyses the question of the counterparts that governments should claim from firms and/or economic sectors supported by vertical industrial policy. This is a discussion that still have to advance because everything indicate that the set of current counterparts (goals of costs, productivity, exportation, etc) still may be increased and improved, what will facilitate the assessment of industrial policy execution by society and the verification of its efficacy in order to yielding more possibilities of economic growth for a country or region. To reinforce the commitment credibility of the agents supported by industrial policy, this paper proposes to maintain the counterparts meant before and that such agents will be stimulated to commit specific assets in their activities that are supported by govern. It is shown that, without use more public resources than the used currently, this new counterpart may reinforce substantially the incentives that the firms supported by vertical industrial policy have it to execute the traditional counterparts assumed by them, and with it guarantee the best possible use of public resources.